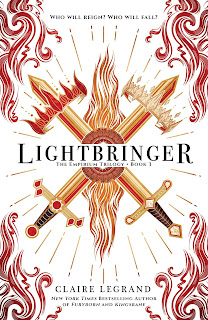 Queen Rielle, pushed away from everything she loves, turns to Corien and his promises of glory. Meanwhile, whispers from the empirium slowly drive her mad, urging her to open the Gate. Separated from Audric and Ludivine, she embraces the role of Blood Queen and her place by Corien’s side, determined to become the monster the world believes her to be.

In the future, Eliana arrives in the Empire’s capital as a broken shell of herself. Betrayed and abandoned, she fights to keep her power at bay—and away from Corien, who will stop at nothing to travel back in time to Rielle, even if that means destroying her daughter.

But when the mysterious Prophet reveals themselves at last, everything changes, giving Rielle and Eliana a second chance for salvation—or the destruction their world has been dreading.

The incredible conclusion to the trilogy that started with the instant New York Times bestsellers Furyborn and Kingsbane!

In this epic finale to the Empirium Trilogy from New York Times bestselling author Claire Legrand, two queens, separated by a thousand years must face their ultimate destinies.

Hardcover, 594 pages
Published October 13th 2020 by Sourcebooks Fire
Order: Book Depository and Amazon #ad
Oh. I know. This book came out months and months ago, ha :D But I suddenly realized that I had never had it as my Waiting on Wednesday posts. What even. And I still have not read this most gorgeous book. Whaaat. I am the worst. Ahh. I did peek. I do own all the copies. But I am SO nervous, haha :D I know I will love it. <3 But I also need to re-read Furyborn and Kingsbane first. And I have read so, so little this year. Sobs. Really hoping to start soon. As I do want to read this book. So badly. I just know that it will hurt the most. So rude :) Have you read it yet? <3 I look at the spine for it every day. Sigh. So beautiful.
What are you waiting for on this broken Wednesday?
Posted by Carina Olsen at 6:00 AM