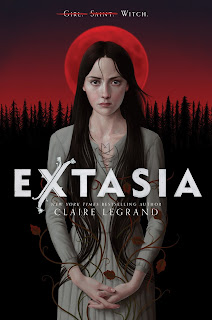 I cannot even begin to share how excited I was to start reading this book early. It is not out until February. But when I had the chance to read it early via Edelweiss, I started it right away. And I do not regret it for one second. This book was everything and more. I can't wait to own all the copies of this most perfect book.

I have been the biggest fan of Claire and her books for so many years now. Ever since her first one came out. I know I will love everything she writes. Yet I am still a bit nervous before starting something new. I had no need to be, with this book. I loved every single thing about it. Even the parts that tore my heart to shreds.

There is so much that I wish to say about this book. I will do my best to share no spoilers. But there is so much I want to share, haha. Will begin by saying that the writing was truly completely perfect. Not one thing I did not like about it. I loved connecting with the characters and this world. It was so good. This book tells the story of a sixteen-year-old girl living in a small village. We do not know her real name. And we actually never learned it either. How rude, haha. We know the name Amity, which she is given early in this book, when the village elders make her into one of four young saints. All girls, all her age. Amity have wanted to become a saint all her life. For the chance to help her family get treated better, after the shame her mother left them with.

This book is all kinds of complicated. And I do not fully know how to describe it. I will do my best. I simply loved every moment of it, though. It takes a little while before it fully starts, but I did not mind that. I liked reading about this small and quiet world. Though every bit that was revealed about how they lived made me feel worse and worse. This was not a nice village. The men were in charge. And Amity did not know any better. All her life, she just went along with everything the elders said was true. Everything they did.

And completely terrifying to read about too. Yet so interesting and fascinating too. Claire did such a great job creating this world. At first it feels like a book set far in the past. But then we learn it is set in the future instead, after the world ended. And this village was chosen by God to live. Or so they believe. There was a lot of God and prayers and such in this village. I did not like this one bit. Shudders. It was too much at times too, which was the point. I very much enjoy reading about it, even though it was fully crazy at times.

There is so much bad going on in this place. It takes a while before Amity starts seeing this place for what it is. Not before after she is made a saint. When she has her own first visitation night. Which I think was once a week. And it was so fully horrible to read about. Oh, how they hurt these four girls. And how no one did anything. How they all accepted that this was just how things were. How Amity thought like this too. At first, at least. These people did not know anything other than their small village and their rules.

But she changes. She learns more about what happens to the women in this town. She realizes some truths about her own family too. Her father was not a nice man. And her dead mother was not the evil woman they all said she was. Her younger sister, Blessing, was all kinds of adorable, though. And I loved her so very much. I loved their relationship. It was so well written. I so loved the other girls we get to know too. Mercy and Silence. They were fierce and loving and brave. I adored them beyond words. Best girls.

There was a little romance in Extasia too. Between Amity and another girl. And it was so beautiful. Only small things. But they were important things and they gave hope to this dark book. At first there was a boy, Samuel. Whom Amity was meant to marry, her best friend. He loved her. And she loved him, just not in that way. I adored him beyond words. He had a few small faults, but he had a great heart. And he was her best friend. I loved that so much. They did not need to be a couple. I loved their friendship the most.

Another thing I really loved about this book is how later on, the girls choose their own name. What they wish to be called. And I loved that very much. It is also a book about the devil. A book about witches and the power they can have. It is a book of magic. And it was fully incredible and fantastic. I loved this book so very much. Gosh. Of course, it was also a book full of pain and evil and hurt. Which was so hard to read about, but was so good too. This village needed change. And change would come, bloody change.

There is so much I wish to say about this book. I have already said a lot, yet not nearly enough about what happens. What hurt me the very most about this book was when we read about what happened to Amity's mother. It was evil and cruel and it hurt so badly. And this thing happened to so, so many other women in this village too. It was so painful. But so important too. The elders of this place were no good. There is so much hurt in this book. So much darkness. So much pain. And it was great to read about too.

I have not said nearly enough about the witches of Extasia. And I won't say too much about them either. But gosh, it was exciting to read about. There were wild women outside in the woods. It did not go well when Amity meets them at first. But it slowly got better. And I liked getting to know them all. Okay, loved Amity the most, and her friends too. The witches weren't that awesome, ha. But I loved reading about them all. I loved reading about the power they had. The power Amity was learning. It was so amazing.

The ending was awesome too. A little sad. A little hopeful. A lot of evil. Makes me feel certain there will be another book, if not a direct sequel, then a companion. And oh, how I hope this will be true. I would love nothing more than to read more from this world. Even though it destroyed me. Even though it was such a difficult world to live in. I want more. I want more of all the girls. I need to know what that ending meant. But would be okay with nothing more too, as I fear a second book would bring so much more pain, sobs.

I still wish to write more about this book. Despite having written so much. Despite having already shared too much too. But my gosh. This book was excellent. It hurt me so badly. But it healed me a little too. It was full of surprises and twists. Most of them evil. All of them thrilling to read about. I did not want this book to end. And I want more so badly. Claire writes the very best books. And the best girls. I loved Amity the most. Her new name was the best, though. She went through so very much. And changed much too.

Extasia was every bit as incredible as I had hoped it would be. It completely ruined me. And I so loved every moment of it. It could not have been more perfect. Of course, it was all kinds of dark and evil. But I loved that too. I loved how grim it was at times. Because it was also hopeful at other times. There was so much that I loved about this book. And I cannot wait for everyone else to love it too in February of next year. This is a book that will hurt you. But it will also heal you, at least a little. The pain is totally worth it.
Wherever you are,
whatever you fight,
may your eyes see much,
may your rage burn bright.