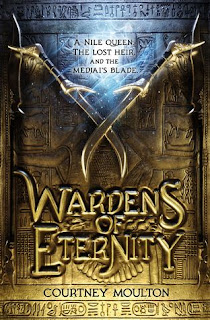 I don't even know where to begin with this book. When I saw the gorgeous cover I simply had to read this. I was lucky enough to be sent a stunning ARC of it and I could not wait to start reading. But gosh, how fast this joy turned to dread. Since this book was nowhere near as good as I thought it would be. I'm disappointed.

And so I have to give this book one star. Simply because I spent most of my time reading it hating it. Which makes me both angry and sad. This book looks so special and sounded good too. But it was not. And I have so much I wish to share about it all. Minimal spoilers for the story. Just sharing everything else I disliked. Ack.

I wish my review could be positive. I wish I had a bunch of good things to say about this book. But I do not. I pretty much hated it from start to finish. Which breaks my heart a little bit. This whole book was such a mess. There were things that could have been great. But I did not feel like any of it were done well enough at all. Which brings me to my worst problem with this whole book. The writing. I could not stand it for one moment even. It was so awful. Every single thing was described like crazy. This girl seemed to be able to tell everything about a person or a thing by just looking at it. And every thing was described. All the time. It was maddening. I had such a hard time focusing. Because there was so little story; only descriptions. And they were not good at all.

This book tells the story of Ziva. She was abandoned by her parents when she was three years old. She was raised in an orphanage. Spending all her time alone, no friends, no family. I actually really liked the beginning. Reading a little about Ziva and the poor life she had growing up. But that didn't last long. Sigh. The book takes place in 1939. There are mentions of the nazis. Which did not fit in at all. And it was fully silly to read about. Ugh. They were also barely there; supposedly interested in Ziva and her powers. Ha.

Ziva was treated as an outsider her entire childhood, because of her not being white. She did not know where she came from, who her parents where. She only knew that she looks different. And that she might be from Egypt. I liked Ziva a lot in the first pages of the book. But then the book really started and I could not care less about her. I tried to love her. But I felt nothing at all for these characters. They had no spark. No personality. I think it must be because of the terrible writing. Made it impossible to feel for any of them.

This book mentions magic. That Ziva have had magic for as long as she can remember. Her hands have sparks. It was weird. And this magic was never really explained. Ziva gets attacked by ancient Egyptian creatures. With two teenagers saving her. And they see that she is the lost girl they have been looking for all their life. Ha. And she is special. She has the soul of a thousands of years old Egyptian queen. Only she can bring her back to life again, to save them all from the germans and war. Yeah. It was odd. Sigh.

These two teenagers tell her to come with them, to learn about herself and her past. And as they look just like her, and so beautiful, she just leaves with them. Without saying goodbye to the two people she knew. Without returning a library book she had just gotten to loan. Without getting any of her stuff from her small apartment. That was simply weird. And bothered me for ages, haha. She just left with them. First to their hideout or whatever. Then from New York to London. Then later to Cairo as well. They were all very rich.

But yes. The magic. She learn she is part of a group with special powers that all know magic. She begins training with them, learning to read hieroglyphs. And she learns everything super fast. She's awesome at fighting and doing magic after just a couple of days. Yeah. Not realistic. She was skinny and starved. She should not have been able to fight for a long time. She shouldn't have been able to remember everything so fast either. Also, she learns new magic spells in one day. And knows them all. What. It made no sense.

And she calls them all her family. The two teenagers she just met. And she is falling in love with the boy, Sayer, right away. Of course. The writing was so awkward that it was impossible to ship these two. She trained for a few days. Off page. Then they sort of go into battle and she's amazing at it. Of course. Then there were the immortals. Because of course an Egypt story must have gods as well. Which could have been great. But they were thousands of years old and acted worse than teenagers. It was just awkward.

There isn't much for me to say about this book. It is about Ziva travelling with these new people she just met to try bringing a long dead goddess back to life. Most of the book was all about descriptions of things. It was not good. Sigh. The almost romance was just bad. The ending of this book was even worse. What. Dramatic and beyond silly. I simply did not care one bit for any of these characters. But I wanted to. The setting was so interesting and I wanted more. But it was not done well enough at all, not for me, at least.

I shall not say much more about this book. One star, because I did not like it at all. It bothered me from start to finish. I wish I had loved it. But I didn't. The Egypt customs and such could have been amazing. But the writing did not make it seem so, sadly. Wardens of Eternity was such a disappointment to me. I wanted so much more. But I tried to like it, and I did finish it. Curious to know what others think. Thank you so much to Harper360 UK for sending me a free ARC to read and review. I'm sorry I hated this one.