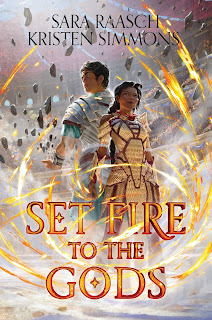 When I heard about this book I knew I had to read it. As it looks stunning and sounds great too. I haven't read any books by Sara yet, but have read books by Kristen for years. This book written by both of them was written very well. I liked the writing a whole bunch. But sadly only a three star for me, as I had a few issues.

Which does break my heart a little, as I wanted to love this book a whole lot. But I did enjoy it very much. I just did not love it like I wanted to. The writing was great. The world it was set in was so exciting and I liked the characters. I simply wanted to feel more for them all. I wanted a little more from the world and everything.

This book tells the story of Ash and Madoc. It tells the story of six gods ruling the world. Fighting their wars using human gladiators to do it. I liked reading about all the different gods and how they ruled their cities. We only get to meet two of the gods in this one. But, well. Although I found them interesting, I also thought they were a bit less. I wanted more. I grew bored fast. Oops. Which was the same for me with Ash and Madoc. I adored them both. But I loved neither of them. I simply wasn't able to connect. Sure, they both have losses in their life in this book. And I was supposed to feel this grief with them. But I felt nothing. Ash loses her mother in the very beginning of the book. And I felt like she barely thought about her, barely felt any grief. It was, well, odd.

We do get to know these two characters a lot, though. I did adore them both, despite not loving them, ha. Ash lived in the city of the fire god, having the powers of fire. She was a fire dancer, before her mother died. Which I liked reading about. She has a few friends, but they were all her mother's age, so they did not really count. I liked getting to know them, though. I liked how they cared for Ash. Whom I found to be a sweet girl, yet nothing special for me. Sigh. She was a great fighter, though. Strong, brave and loving.

Then there was Madoc. We learn about how his father cast him out when he was only five years old, how he first tortured him at times, trying to get his powers to come. But they never did, so he just turned him out. Madoc found a new family a couple of years after. And I liked getting to know his new siblings, Elias and Cassia. They were pretty sweet. But yeah. Madoc was supposed to have a heartbreaking back story. But I barely cared. Sigh. Which just makes me sad. As I liked Madoc a whole lot. He was pretty adorable.

But despite not loving these characters I was always interested in knowing what happened next with them all. I did want to know what would happen with the plot, with the gods and the other gladiators. But I also did not care the way I wanted to. I wasn't excited much in this book, which hurts my heart a little. I wanted to love it. But I just did not. There were a lot of fighting and gladiators and all of that. And I barely cared at all. Sigh. Might be because I'm not that interested in gladiators. Maybe. Either way, it wasn't really for me.

This book was about Ash and Madoc. But also about the gods ruling and having their wars. How the gods did not really care for their people, how they did not care for the poor. It tells the story of Ash and Madoc both having to fight in their newest war, a fight which will end up a fight to the death for two people. And they are on opposite sides in this war. Ash have the power of fire. Madoc could have the power of earth, but he did not. But he does have some other kind of power. Unknown, but that gets stronger all the time.

So this book was about Ash and Madoc meeting. About a very, very small romance maybe happening between them. I did ship them together, but not really all that much, sadly. Aw. It's about Madoc learning about his unknown powers. It is about the gods fighting for power. And about Ash trying to find a way to kill the gods. Which should be impossible. There was a lot of gladiator fighting in this story. Kind of good, but I sadly did not care that much. But for those that do, it will be amazing to read about, I am sure of it.

Set Fire to the Gods was sadly not everything I had hoped it would be, but it was still such a great read. And I did enjoy reading it from beginning to end. I only wish it had been a bit more. Still. It was a fantastic first book. And I am so curious about what happens next, because that ending was left very much open. Huge thank you to the publisher for the auto approval on Edelweiss. So glad that I had a chance to read this book early. Also, that cover is beyond gorgeous. I do think that you should all read this book as well.