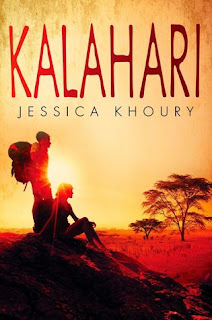 I finally had the chance to read this gorgeous looking book. Have adored books by Jessica for years. Still I had somehow not read this one by her until now. I ended up enjoying this story a whole lot. But there were also so many things about this book that was not for me. And so I'm giving this three stars. Good, but no love.

I feel unsure about how to write my review this time. I have a few positive things to mention. A little bit negative. And yet I really did like this book. It simply wasn't perfect to me. It was too dramatic and too full of cliches. But I so liked the setting. I did like the plot as well. The writing was good, but had trouble caring for anyone.

This book takes place during winter in Kalahari. Which means it is still pretty hot since it is a semi desert. There are mentions of animals living in this place. Local people somewhere. And how it all looks. I liked that a bunch. The setting of this book was pretty stunning. It tells the story of Sarah. She and her father have this small camp in the middle of this place, researching animals and such. This book begins with them having just agreed to take on five teenagers from around America for two weeks. They will get funded for their research by doing this. But taking care of five city teenagers is no easy thing. Especially not with Sarah's father taking the only other person with them, Theo, along to hunt for poachers just minutes after all of these teenagers arrive.

Which means Sarah must entertain them all by herself. Her dad should be back by nightfall. But he does not arrive. So they set out looking for him. Which is how this story begins. With Sarah searching for her dad. Finding their friend dead her father missing. With six teenagers now out in the desert looking for him. With them instead being hunted by something else. Their camp got destroyed. And so they were without any water or food and only had a car for a few miles. Which means they're all walking through the desert.

Okay. Honestly, I don't know how to write this review of mine. I'm trying. But this book was not easy. I did like it a lot. I liked learning about the desert and some of the animals there. I liked how they were hunted by a silver lion and those hunting for the lion. I enjoyed the story about the virus and trying to find a cure. Some things were a little too easy at times, but I liked it even so. It is a story about these teens trying to survive the desert. Trying not to be found. But gosh, how they argued all the time. Ugh. Not good at all.

And another thing that bothered me was that it was never mentioned how they used the toilet while out in the open for days. They argued about everything else. I feel like it should have been mentioned. And how much they must have smelled, out in the heat with no showers for days too. But no mention of that either. Hmph. Still. It was an interesting story to read. And I have written so little about what happens. But it is all I'm going to write about it. The story was good but sadly not that good. I enjoyed this, though. Somewhat.

This book is a three star for me simply because I did not care enough. I liked Sarah. I liked the teenagers around her. But I did not love them. I did not really care what would happen to them either. It is supposed to be a book about grief at times. I did not feel that at all. I did not even care one bit about this romance. Ack. Sure, they were kind of cute, but it was a bit too weird and sudden for me. I wish I could have gotten lost in the writing, but I did not. And gosh, all the cliches. I could not handle it. They were so bad at times.

With the teenagers around Sarah. The typical barbie and ken, the rich couple above everyone, that they all hate. The smart girl that everyone ends up calling a nerd. And the funny guy that is not very funny at all and whom they all just tolerate. And of course the handsome boy who falls for the main girl right away. It was a little too much for me. Ack. I liked reading about them all. I did. But my gosh there was so much drama and arguing and I did not like that one bit. So yeah. It was a bit too much. Still. I enjoyed the plot.

Kalahari is a story about teenagers in the desert. About a deadly virus and them trying to survive. Sarah and her new friends are being hunted by people wanting to kill them. They learn more about a virus that has been unleashed. And I very much liked learning about this virus. A bit too easy to find out the cure, though. But the virus was every kind of interesting even so. It made every animal and human turn silver. Which also drove them mad within days. Though I did not love Kalahari, I still think you should all read it.