Review: The Cerulean by Amy Ewing 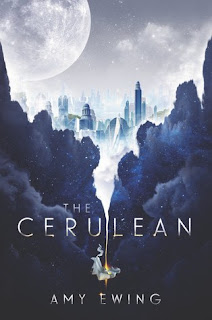 I was so completely unsure about this book. I wanted to read it because of that stunning cover. Which I like so very much. And thought the summary seemed kind of interesting too, yet a little weird as well, haha. But I was excited to give this book a chance, hoping that I would love it. I didn't, but I enjoyed it a whole bunch.

Which I was sure I would not do, because I made the mistake of reading a goodreads review before I started. Which was all kinds of negative. I did not find the same issues with the book, though, and I'm thankful for that. Will be writing more about that soon. I'm giving this book three stars. I did not love it but I liked it so much.

This book is told from four different point of views, scattered all through the book. We first get to know Sera a whole lot, which I liked. I did not love this girl, but very much liked her and enjoyed getting to know her. Especially liked getting to know where she lived. Which was a planet above the sky, in the stars. Tethered to another planet below, where all regular humans lived. And Sera was very much not a human. On her planet everyone is female. There are no males, and there has never been any. Yet the women are still able to have children because of some kind of magic they have. And gosh, there is a lot of magic on this planet. And I liked that a whole bunch. I liked getting to know more about how everything worked and all they could do. It was interesting.

But what weirded me out about this planet was the romance. I liked that they fell in love with each other. I did not like that they got married in threes. Yeah. They fell in love as three people. I do suppose this could happen, but to me it was a little awkward and I found it weird to read about. Especially when these three women had a child. They become a purple mother, a green mother, a orange mother. And that's what this child calls them until she leaves home. It was so very weird, haha. I never got used to it. Was not for me.

But even so. I liked this planet. Oh. And I forgot. They all have bright silver skin and blue hair and eyes. I found that to be pretty interesting. Blue blood as well. And they have magic in it. And I liked learning new things about it all. Anyway. Sera. We got to know her a bunch, and I liked her a lot. I loved her best friend, Leela. They had such a special friendship. Until it was announced that Sera will be the one to make their planet finally move on in the stars. She has to jump, die, so that the others may leave. Yeah. What even.

It was all kinds of weird, haha, yet so interesting too. I liked reading about it. It hurt my heart how very heartbroken Sera and her mothers were about it. They were not okay. Neither was Leela. But everyone else did not care all that much. Sera did not want to die. But she listened to her people, to Mother Sun, their god, which was so not my thing, but yeah. And so she jumped. Except she did not die. And is now on the planet below, with the humans that live there. Sera gets captured right away, and put in a cage.

Which is when we meet two other point of views. The twins, Leo and Agnes. I did like them both. Leo the most, I think. Though he was kind of an idiot at first. And also just felt like too little, to be honest. I wanted him to be more amazing. Agnes is gay, in a world where it is not allowed to be, where they sort of live in the past, with women only getting married and not working and things like that. It was pretty depressing. Yet so interesting too. Their father was the very worst, yet he could have been more brutal as well. Sigh.

This book is about Sera trying to survive on the planet below her home. She cannot talk to anyone there. She understands their language, but they do not understand hers. Leo is the one that captures her. But he ends up changing over the book, wanting to stop impressing his father. There is a lot going on. Things with Agnes, which I enjoyed reading about. I found her interesting. I wanted more, sigh, but it was good too. They both want to save Sera, to help her get home. Which will be all kinds of complicated to try to do.

There was one thing that I loved about this book. And that was Leela. She is still on the planet in the stars believing that her best friend is dead. And knowing Sera's sacrifice did not work, their planet isn't leaving. The woman in charge of the people is doing suspicious things, and Leela works to figure it all out. I loved getting to know this girl. And I so wish she had more chapters. I loved getting to know everything she was doing and found it to be so very interesting to read about. There must be more of her in book two. I need.

There is so much going on in this book. And I did not write down most of it, haha. I found the plot to be exciting most of the time. And I always needed to know what would happen next. But it's also a three star for me, because I did not love this. I did not love the characters; I felt like I did not get to know them well enough. There was no romance in this book. And I disliked that. There was also too little action, I think, considering this book was five hundred pages long. I felt like more should have been happening. Hmph.

Did I think this book has some problems? Yes. Did I think it was racist and queer baiting? No. But I also think that everyone that reads books will feel differently about certain things. And that is very much okay. Although I did not think this book had those issues, others might, and that is okay too. Having different opinions on books is great. And this one was difficult. It was painful to read at times. Because of animal cruelty; keeping them locked up and such. It wasn't too horrible, but still a bit painful. But written well too.

My gosh. I have written way too much about this book. Sorry about that. But I had so much that I wanted to share. And I still have so much I want to share. I did not love this book. But I liked it so very much too. And because of that I could not stop writing about it, lol. Took me some time to start writing my review, as I was nervous, but gosh, the words did not stop. I do not think I will forget some parts of this book anytime soon. Though I do wish that it had all been perfect, haha. Wish there had been romance. Needed that so.

Which reminded me of something I had yet to share about this book. And that I need to share. Sera came from a planet of only women, no men. They all fell in love with each other. Yet she never felt attraction to any of the girls her age. And when she arrives on the planet below, she feels it for the first time for a man. Meaning she is not gay like everyone else on her planet. Was a bit weird, but okay. I did ship her and Leo a lot. Feel like it could happen in book two, but also unsure how it would work out. Hmph. I'm so nervous.

Although I did not love The Cerulean, I'm glad that I read it. Because it was a pretty stunning book and it was all kinds of interesting and sort of exciting too. I stayed up late to finish it, as I could not stop reading once I had started. Had to get to the end. But my god. That ending. It was so rude. Felt like the book and adventure was just beginning, haha. So many answers still needed. I will be reading book two. Wishing I could read it right away. This book was not perfect, but you should all read it anyway. It was entertaining.