Review: The Lies They Tell by Gillian French 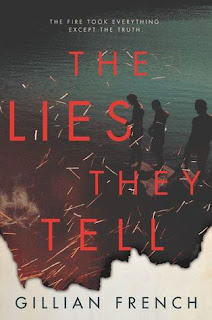 Finishing this book has made me feel so upset and disappointed. Which is such a shame, because this book started out very well. Enjoyed at least half of it so much, and found the small mystery of it all to be interesting and great to read about. Then everything went downhill closer to the ending. And I feel so sad about it all.

I shall start by sharing why I enjoyed this book, at least the first part of it. This is not really my genre at all, but I wanted to give it a try when I read the summary for it, as I thought it looked great and sounded interesting too. And for the most part, that was true. The writing in this book was pretty great, and I enjoyed that a lot.

This is told from the point of view of eighteen year old Pearl. She lives in a small town with her father, whom is a drunk. They are poor too, and she works at the golf club trying to earn enough to live by. In the summer, the place is filled with rich boys and their parents, out with their boats and having parties and such. Pearl was an interesting character to get to know. I liked her a lot, but also didn't know all that much about her. But she was sweet, and I liked her a lot. But oh, I'm not all that happy about her life. She works with her best friend, Reese. She's been in love with him ever since she met him. But they are only friends. He is in a relationship with a girl at work, and she sees them together all the time, and she's full of hurt. Just. Ahh. No. More on that soon.

First I'm sharing more about why this book is a three star for me. The reasons for why I liked it. This book is about Pearl and her life, but it's also about a fire that happened six months before, killing four out of five people from a very rich family. Pearl's father worked for them, and he got blamed for what happened. No one ever got caught for the deaths of the family, and her dad has lost almost all of his jobs. And Pearl is not okay with it at all. She wants to know what happened. Who is to blame. She want her father cleared.

And so this summer, when one of the rich boys starts talking to her, she decides to begin hanging out with them. To try to figure out more about what happened with the fire. So she's hanging out with the boy who lived, Tristan, and his two friends, Bridges and Akil. She's slowly investigating. And I liked this very small mystery a lot. I liked reading about her becoming friends with these boys, and hanging out with them and others too. They are all over eighteen. And at first I liked them all, sort of. But then that changed. So rude.

And sigh. While I did like this book a lot in the beginning, I still did not love it. And then some weird things started happening, and I'm not feeling very pleased about it at all. I'm going to try not to include too many spoilers, but I need to talk about all things romance. I have to. Because it's bothering me beyond words. First I wish to mention that Akil was such an asshole. I hated that boy so much; he was always rude to Pearl and he was not nice to any other girl either. I wanted him hurt, honestly. Shrugs. It did not happen.

In this book, Pearl has not had a boyfriend before. She's in love with Reese. But he's with someone else. And at the end she learns that he is moving in with his on-and-off girlfriend. And so Pearl is heartbroken. And I'm not okay with it at all. This book had no romance. I felt sure that Pearl and Reese would end up together. But they never did. They were just friends. But she wanted more, and I hated reading about it, how it never happened. Reese was mostly a great person, though. And I liked getting to know him a lot.

But yeah, when Pearl starts hanging out with the summer boys, she has to flirt a lot with Bridges. There are some kisses. She doesn't even like him. She was using him, somewhat. And he was using her too, kind of. And I just feel so truly disappointed by all of it. I wanted a good mystery book with an awesome romance too. Mystery was a little tame, and romance completely sucked. Ugh. There was even sexual tension between her and Tristan. What. Yeah. Three boys. No romance with any of them. Disappointed.

That whole drama was not even written that well. Ugh. I wish this book had been without all of it, to be honest. She should have just been friends with all of them. Or had a relationship with just one boy. Hmph. I'm bitter about it, and I feel I will think about it for long now. Ahh. Hope to forget about it soon, because it just makes me sad. But anyway. This book was about the mystery too. About Pearl trying to find the real killer. The ending was kind of good, but also not exciting. I had expected more, to be completely honest.

Overall, The Lies They Tell were disappointing for me. It started pretty strong, then ended really badly. I liked reading about Pearl a lot. But she didn't even get her happy ending, and I am really bitter about it. Ack. But yeah. I'm still glad that I gave this book a try; as it wasn't all bad. I feel sad that I didn't like the book more, but yeah. I do think that a lot of others might enjoy it lots, though. I'm curious to know. Huge thank you to HarperCollins International for sending me a free ARC copy of this book to read and review.