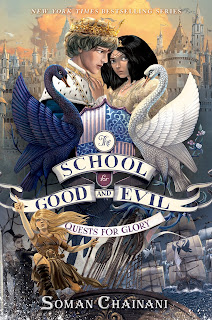 Cannot even begin to describe how happy I am that Soman has written more books in this world. It's the very best thing, because I wasn't nearly done reading about Agatha, Tedros, Sophie and everyone else. Though now having read this book, I am sort of regretting how much I wanted this, ahh. As it fully destroyed me.

It was all kinds of wonderful too. Such a incredible fourth book. The writing was, as always, perfection. And I love reading about all of the characters. I'm giving five stars to this one. Because I loved it oh so much. Although that ending did kill me. And I'm not sure how I will ever survive the very long wait for the next book.

One thing that I really loved about this new book is that it is also filled with new characters. It's mostly the story about Agatha and Tedros and Sophie, but there are new people included and they were all awesome to read about. And all the old characters too. This time there were a lot more different point of views. I loved that so much. Loved reading from the different characters. Still prefer Agatha, and there is a lot of her, yesss. But I did love all the other characters too. There is so much happening in this book. I don't know how I will ever talk about any of it. But trying my best. I just have so much love for this book. But my mind is a bit ruined right now too, because of that ending. Gosh. I mean, I had peeked, so I knew what was coming, but still the worst.

But won't be talking about the ending just yet. First there is the beginning of the book. And oh. In a way I sort of wish that book three had been the ending, because Agatha and Tedros were happy, and off to get married and just be together. But at the same time, I knew I needed to know more. I needed much more from this world. And I'm so thrilled that I'm getting it. But I'm also a bit sad, because there will be a lot of heartbreak coming. Ahh. I can handle it, though. Probably. Either way, I'm really excited for all to come.

Anyway. This book begins six months after the ending of The Last Ever After. Agatha and Tedros have been in Camelot for half a year now. But they have been ignoring each other. And that just broke my heart. Sniffs. But they still love each other very much. They are just bad at communicating. Hah. And I totally understood that. Still. Made my heart ache. Tedros was supposed to become king the day after they arrived. But he failed to pull his sword out of a stone. And so he is not fully king yet. Not at all. Ahh.

And that is sort of what this book is all about. Tedros trying his best to become official king of Camelot. Agatha trying her best to help him. They fight a bit, but they also have such stunning moments and I ship them so so much. They are the cutest. But heart is aching too. How rude. Anyway. I loved getting to read about Camelot. Though it was pretty bad too, because of how this castle had fallen. But still, exciting to read about. But everything was not about Tedros trying to become king, though. So much more happens.

There is Sophie, who has been the Dean for Evil for six months now. She's awesome at it, though maybe a bit too much in my opinion, haha. All of the lovely characters from the first books are now at their own quests, trying to fix things and such. But things are not going well. They are getting attacked. Someone has died. And that broke my heart so, so much too. There were a lot of deaths in this book. They were all so heartbreaking. Rude. But so well written, that I couldn't help but love reading about it at the same time.

This book is about Agatha and Sophie having to try to save their friends from their quests, as they are being attacked. And so much happens with all of it. There is a magic ship. There are awful pirates. And there is Robin Hood. And all of it was so much fun. Though horrible too. And I loved reading about every moment of it. And ahh. Such lovely characters. I adore Hort. I love Hester and Dot and Anadil so much. And the new characters, like Nicola. She was pretty epic. So kind, a bit fiery, and I loved that about her.

But oh, that ending. I won't mention what happens, but gosh. It was the rudest. And my heart is still racing from it. Since I had peeked, I knew what would happen, but it was still a shock. Though there were so so many clues in the book too. I'm a bit upset with Sophie in this book, to be honest. She meets a new boy. Who kisses her the moment he sees her, almost. And she then kisses him back. Just. It was a bit creepy. Yet she fell in love with him right away. It was just, well, way too soon. But still, the boy was cute. Hmph.

Anyway. I was very much in love with this book. Though it was all kinds of rude too. And I need book five right away. I must know what happens next. That ending was so rude and so good and I need more of Agatha and Tedros right away. Hmph. Quests for Glory was all kinds of epic. Everything I wanted it to be and more. This series is simply perfection. I just love these books oh so much. Just, don't break my heart with the next books. I need a happy ending. And I need it more than anything. I'm crossing all my fingers.