Review: The Valiant by Lesley Livingston 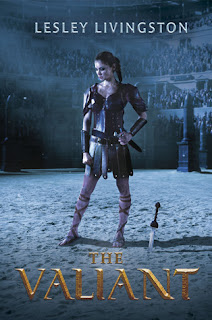 I enjoyed the plot in this book so, so much. And now I want more gladiator stories, lol. I really loved the time period this book was set in. So interesting and so exciting too. I liked parts of this book a whole bunch, but I also had a few issues with other parts. And so I'm giving this book three stars. I feel a bit conflicted about it.

This book looks gorgeous. I love that cover a whole bunch. And so many other bloggers that I adore have loved this book; which is why I was so excited about reading it. And I am still glad that I read it. I just didn't love it like so many others did. Aw. I wanted to love it the very most, but oh, I had a lot of issues with this, sadly.

The Valiant is told from the point of view of Fallon. And she's the daughter of a king. I did enjoy getting to know her. I simply never loved her. Which was a bit depressing. I also enjoyed the writing in this book, but many times I found it to be awkward, and hard to read. Which is another reason for why I didn't love this book. Aw. But anyway. I loved that Fallon was a warrior. She was pretty fierce at it too. I just wished I had loved her the same way. But oh, the beginning of this book. I disliked it a whole bunch. Okay, the part where she's riding the chariot was pretty awesome, but what happened after that was not. Sigh. She's known this boy for years. They are best friends. Then he suddenly kisses her, and she decides that she loves him. It made no sense.

I mean, this sudden realization that she loved him would have made sense, if she had feelings for him before, but it didn't seem like she had. And the first chapter is of them kissing. I didn't understand their friendship at all. Which was disappointing. And so my first part of the book was not a happy part. Aw. Of course, this boy she claims to love is not the real love interest. Considering that he dies a few pages later. What. And so the kissing made even less sense. Sigh. Oh, and his brother wants to marry her too. Haha..

Thankfully, Fallon ends up getting kidnapped right after her friend dies. Which I do suppose was pretty awful, as she got taken by slavers, but I was just happy she was gone from her hometown. Sigh. Should also mention that this book is set in ancient Rome. Which is awesome. Wish it had been more about that. But anyway. Fallon got kidnapped. And it was horrible to read about, all the slaves being taken to Rome. I liked the girl she met, though, Elka. She was awesome to read about. Yay for that. I liked their friendship.

After she gets to Rome, she's sold to be a gladiator. And so much else happens too. Sigh. I'm not going to talk about all of it. Just that I did find this plot to be pretty exciting. I just also found it to be a bit less than I wanted it to be. There wasn't nearly as much fighting as I thought there would be. Aw. I wanted more arena fighting. And the summary promises a romance. Haaah. I wouldn't really call it a romance at all. I suppose that Cai seemed awesome. But they had no chance to get to know each other. Annoying.

And even with this romance there is talk about love early on. Sigh. The romance was such a little part of the book. A few kisses in between months. And they didn't spend much time together at all. I just didn't understand their romance, sadly. I wanted to ship them so badly. And I do, I just wish the romance had been done better and been done more. Sigh. Fingers crossed that it will be better in book two, though. Because I will read that one. So curious. But anyway. Was a bit disappointed by the romance in this book.

There is so much else happening, though. Nothing too exciting, sadly. There is training to be a gladiator with a lot of other girls. Fallon made a couple friends. The rest hated her and wanted to hurt her. Ugh. There are even dead birds being put in her room. Which made no sense at all. Who did it? Why wasn't that a bigger thing? Sigh. And Fallon also hears a voice in her head sometimes. What. And why? And ugh. I just feel like I have more questions after finishing this book, haha. Which isn't fully a good thing.

Okay. I cannot write more about this book. There was this twist early on that I saw coming even earlier. Was a bit disappointing too. Felt like that could have been done better as well. Oh, well. I did enjoy this book, truly. I just wish it had been better. The ending was way too rushed, and the book ended too soon. Still so many answers needed. But overall, I did think that The Valiant was a good book. I did like many parts of it. I just did not love it. Sigh. But I do think you should all give it a try. Such awesome time period.