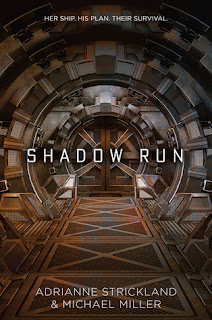 Oh, this book was disappointing. I had hoped so badly to love it. Because I adore everything space. Books, movies, shows. And this one sounded pretty exciting. But hah. I had big issues right away. But I thought it would be getting better. Sadly, it never did. This book only got worse and worse for me. Very disappointing.

There were times when I liked the writing. But those times were not often. For the most part the writing in this book annoyed me a whole lot. I didn't care for any of the characters. And both main characters had such weird ways of thinking. And the whole book was more telling than showing, which is annoying and not good.

This book is told from the point of view of Nev and Qole. Sadly I cannot say that I loved either of them. I liked Nev at times. But most of the time the way he behaved was silly and just cheesy. And Qole was not a good person at all. I so wish she had been better. But she wasn't. I hated the way she treated Nev for most of the book. It wasn't okay. They claim she is the best pilot there is. I didn't see that at all. And hahaha. That summary. It sounds like she has a big crew of horrible but loyal people. Again, not true. And the way they are described isn't correct at all. There is Qole, her brother, a girl, and two other boys. Only five people on this ship. And five very badly written people at that. Her brother is overprotective, in a real silly and stupid way. I felt nothing.

The other girl is a hacker, and with no personality at all. Then there is this boy or girl, who knows, which is written so badly, and the characters are always wondering if he is a boy or a girl. It wasn't done well at all. He seemed interesting, but cared not one bit. At the end he was such an awful person and it bothered me greatly. Not a character for me. And the final boy, okay, man. He was huge and so strong and whatever. And he was so protective of Qole. Was stupid and silly and all he did was hurt aka beat Nev, all the time.

Just, yeah. This crew of hers was just not for me at all. They were written so badly and I did not care for any of them. Didn't see how they were a family at all. Ugh. It was just stupid. And I'm so disappointed in it. Sigh. And oh, Qole. I wish I could say I loved her. But I did not. She was always rude towards Nev. And she hurt him too. She didn't understand him at all. Or his feelings. Yet she keep claiming that she cares for him, and hah. I didn't get that. She also wasn't an interesting person, sadly. I wanted to love her. Sigh.

And oh, Nev. I didn't love him either. Aw. Spoiled rich son of a king. Yet he was very gentle and kind and pretty fierce too and great at fighting. Yet I cared for him very little. He starts liking Qole right away when he meets her. For no reason. So silly. This boy is a prince. And after lying to this crew for 24 hours, they find out the truth, then they all beat him, sort of. And I just. They all treated him horribly all the time. Even after he saves them so many times. They still treat him badly. And yet he considers them his friends. Ugh.

The plot is about Nev wanting to kidnap Qole, because of something in her blood. This book is about Shadows, or whatever. Something dangerous that ends up killing people after years. Don't know nearly enough about this, so didn't really care at all. Qole is supposed to be full of this Shadow thingy. And so she is special. And has some kind of power. Sigh. It was a little bit of interesting, except when she killed hundreds of people and didn't care at all. For real. I'm so upset about it. None of them cared. Not okay.

Anyway. The plot. It wasn't really interesting at all. They are just on their ship, trying not to get killed by other people. Then they return to Nev's home, and his family are rich evil people and hahaha. Oh, and he's engaged. Which he didn't mention. Engaged to such a spoiled rude girl and it was so so typical and I hated every moment of it. Such a stupid book, sadly. His family were awful. I could have liked his sister, but she was awful too, yet he is so kind and so different, and hahaha. Yeah. They weren't a good family.

Oh, romance. There wasn't any. First kiss happens on the second to last page of the book. And it was the most badly written kiss I have read. Ugh. It wasn't good at all, which makes me so sad. And there wasn't any romance in the book. Yeah, Nev and Qole are supposed to feel for each other the whole book. But it was silly and stupid and I didn't care for it one bit. Ugh. Then that ending. Yeah, I hated one torture thingy, but only that. Did not excuse that they all killed so many people and didn't feel bad for it at all. Not okay.

Ack. I have only written negative things about this book. Yet I'm giving it two stars. Sigh. I didn't fully hate it. Though it do seem that way now, lol. I just had so many issues with it. I liked some parts. But I still kept reading, but I loved nothing. And I just wanted the book to be over. And yet it wasn't the worst book I have read. But it was really, really bad. And I really wouldn't recommend it to anyone else. Sigh. I felt like this book could have been so much more. But it just wasn't. And so I'm disappointed. Wish it had been better.