Review: The Eye of the North by Sinéad O'Hart 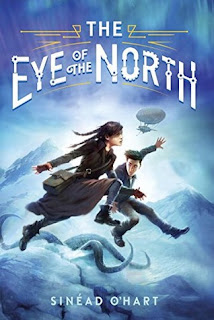 I really wish I could say that I loved this book. Sigh. Because it sounds just like a book that I could love. And that cover is truly gorgeous. And I love middle grade and fantasy so much. Sadly, this one was a bit disappointing. I felt like maybe I could have loved it, had it been written a bit differently. It just wasn't for me.

I mean, there were parts of this book I liked a lot. But there were more parts that I didn't really like at all. I didn't hate any of it, but I mostly found this to be boring. I did not care for the characters like I was supposed to. I didn't think it was written well enough. I liked the creatures, but they weren't such a big part of this book.

This tells the story about Emmeline and Thing. They are both around twelve years old, I think. While I enjoyed reading about Emmeline, I didn't really care for her at all. She seemed rude at times and I just didn't feel like I got to know her at all. Which was disappointing. I felt like she could have been a great character. Sigh. I did, however, like Thing a lot. Well, except for his name. But I liked even less when he starts using a different name near the end of the book. Ugh. Found that to be just silly. But yeah, Thing was an interesting character. He had a tragic past, which I was curious about, though the reveal wasn't good at all. Ugh. Thing has something wrong with his lungs, which I was even more curious about, yet I never got to learn the reason for. Sigh.

This book starts with Emmeline finding out that her parents have been kidnapped, and are most likely dead. She's then told she has to leave right away to some woman in Paris, and stay there until she is eighteen. Uhm. And she just leaves, right away too. Felt a bit weird to me. Oh, well. She's going on a big ship, and there she meets a boy, Thing. I guess they were supposed to become best friends, or whatever, but I didn't feel that way at all, sadly. They don't talk much in the day they get to know each other. Sigh.

And then Emmeline gets kidnapped herself. And so she and Thing spend most of the book away from each other. Which I didn't like at all. I thought I would get to read about a lovely friendship in this book. But that wasn't the case, sadly. They knew each other for about a day. And they didn't seem all that close, to be honest. But they both didn't have any friends before, so I guess they got close because of that. I don't know. But because of this, Thing wants to rescue her when she gets taken, and he tries his best.

I'm not sure what to say about this book. I wanted an epic friendship. Instead they are apart almost all the time. They both spend time with adults. And so this book wasn't nearly as fun as it could have been, aw. I wanted to so much more. There were the adults, which I sadly found to be written really badly. Emotional about things that didn't make much sense at all. I could have cared for them all, I think, if only they had been a bit more realistic. Sadly, I didn't really care for any of the characters in this book. So disappointing.

While these two kids aren't together in the book, they both have two adventures. I suppose I was curious about what would happen with them both, but I didn't really care much. A lot of things seemed a bit over the top, a bit too much. Sigh. This book is about the person who kidnapped Emmeline wanting to wake an ancient creature. And control the world. Which could have been exciting, except it wasn't. Didn't even get to know the villain at all. Why did he even want to live forever and wake up this creature? I have no idea.

Overall, I am glad that I gave this book a try. I did enjoy some parts of it. I didn't like the ending, sadly. But I liked some of the creatures, like the horses. So yay. But mostly this book was disappointing. Aw. Giving it two stars. Wishing I could have loved it more. Oh, well. I do think others should try it, though. Hope that many kids might enjoy it a lot. Huge thank you to the publisher for sending me this ARC to review while I was in Chicago. While I didn't love it, I'm glad that I tried it. It is gorgeous. If you do read it, let me know.