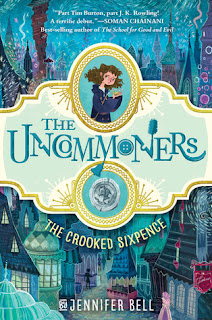 I enjoyed this book a lot. That cover is stunning, and the book was amazing inside too. I didn't fully love it, so I'm giving it three stars, but there were parts that I loved a lot. I found the story to be so good and interesting and I wanted to know more so badly. I will be reading the next books in this series for sure. So excited.

I found the writing in this to be great. I enjoyed it at all times. And the characters were awesome. I liked Ivy and her brother Seb a whole bunch. There were things I didn't like about how some of the characters were written, felt a bit silly at times, but mostly I liked them all, and enjoyed getting to know them. So interesting.

This book tells the story of eleven year old Ivy. And her fourteen year old brother Seb. And eee, I liked both characters so much. Ivy was adorable. And I loved that this book was from her point of view. I loved that she's smart and kind and just awesome. But I didn't like how she treated one character. Hmph. But besides that, she was awesome. And Seb was a pretty good character too. I'm curious about him. I adored their relationship with each other. Such awesome siblings. They are staying with their grandmother, who just had an accident, and is now going to the hospital. Which starts the whole story. There is so much happening, and bad people are coming after Ivy and Seb, and it's so exciting too. I enjoyed figuring out what all the bad people wanted.

Not going to say too much about the plot, but it's so interesting. Ivy is trying to figure out what happened around forty years ago, when her grandma had a bad accident and lost all her memory of her life before. Because Ivy have just learned what her life was like before the accident, but not why she got hurt. And it was so interesting to try to figure it all out. So much happens in this book. For the most part I loved all of it. There were a lot of exciting moments. And the ending was pretty good too. I liked the mystery of it all.

The plot in this book is set under London, sort of. There is a whole different world under there. Not magic. But like it, even so. There are uncommon objects, which can do amazing things. Not going to describe it, but it was awesome to read about. I liked learning what each item could do. It was exciting. And I really enjoyed the talking bells. They were adorable. Especially Scratch. Liked that tiny bell a bunch. There are also ghosts. Which was interesting. And some other creatures as well. I liked reading about all of them.

The reason for why I'm giving this book three stars is because I had a few issues with some things. I felt like the book was a bit too much like Harry Potter at times, though I did enjoy that, it as just a little bit too much, with the villains and such. But still good. I had some issues with the new boy they meet, Valian. I liked him right away. And wanted to know more of him. But they treat him pretty badly, and I felt like his character could have been done better. Hope that is fixed in book two. I need more of this curious boy.

I just adored some of the characters in this book. Ivy was so sweet. And I liked Seb too. And Valian was my favorite. I just wish I knew more about him; that he had been written a little bit better. But still. I can't help it. I ship him and Ivy, lol. But guessing that won't ever happen, as she's eleven, and he is fifteen. Aw. But still, I hope. There are also lots of other people in this one. Like their grandmother. I liked her. But she wasn't written fully well enough for me. Still, I liked her a lot. And Ethel too. Liked a lot of the others too.

I'm really glad that I read this book. I hadn't heard of it before the publisher sent it to me, ack. So glad that I got it in the mail. Because then I got to read this gorgeous book. I'm really curious about the next books too. Hoping book two will be better at the things I disliked in this one. Fingers crossed. Either way, I'm so excited. Huge thank you to the publisher for sending me this ARC to review while I was in Chicago. The Crooked Sixpence is full of adventure and has such a stunning story. I enjoyed it a lot. You must read it.