Review: Darkthaw by Kate A. Boorman 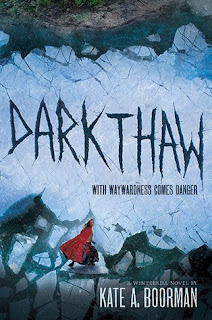 I tried really hard to like this book. But it just wasn't meant the be. Aw. I really wanted to like it more than book one, yet I ended up liking it less. Which is just so disappointing. Especially since the first time I read book one I loved it. Aw. But not this time around, sadly. I seemed to have issues with this book at all times. Sigh.

I'm not sure how to write this review of mine. I'm giving this book two stars. Because while I didn't like it, I also didn't fully hate it. I enjoyed some parts of the plot, but for the most part I disliked it all. I just did not connect to anything. I found this book to be silly and just boring. I didn't care for the girl at all. Was disappointing.

I really wanted to enjoy this book a lot. And it makes me so sad that I didn't. But there was just no way for me to like it. Sigh. I felt like this book didn't make much sense, and it annoyed me often. I liked the writing in book one, but in this one it bothered me a lot. This book was describing way too much. It made my head hurt a bit. Sigh. This book is also from the point of view of Emmeline. While I sort of liked her in book one, I sadly didn't like her much at all in this sequel. I found her annoying and selfish and oh so childish too. I think she was supposed to come off as fierce at times, but she really wasn't. I strongly disliked how she treated some people. Like Kane at times. And Charlie. The ending with Charlie bothered me a lot. She didn't make the right choices.

This time my review will not be long. Because I really don't know what to say about this book. I had many issues reading it. I just wanted the book to end. Sigh. I'm still going to read book three, though. Because I am sort of curious about what will happen next, yet also not really curious at all. Book one at least had a plot. I wouldn't really say that this one had a plot at all. It only takes place in the forest, where they are traveling to find Marisa's people. It was sort of interesting to read about, the forest parts. But not enough.

As I said, I didn't really like Emmeline at all. She was so selfish. Like, she wanted Kane to be with only her, she didn't understand why he wanted to stay with his two really younger brothers and his mom. She didn't understand why he would chose them over her. And that bothered me like crazy. She was not a person that felt for others. She just seemed to want herself to be happy. Sigh. I hope she's better in book three, but I sort of doubt it. I don't think I will grow to like her more. But I do have a small hope, even so.

I wish I could say that the romance was good, but it really wasn't. They share a few kisses. I felt nothing. Nothing at all. Emmeline is always going on about feeling moths in her stomach while looking at Kane.. and I found that to be so cheesy and silly. I didn't get their feelings for each other at all. I still haven't seen them talk to each other for real. I wish I believed in their romance, but I still haven't seen any reason for why they should love each other. Ugh. I wish the romance had been better. I simply didn't care for it at all.

There are other characters in this book too. Like the other girl, Matisa. And I didn't really get her at all. Didn't know her either. She just showed up in book one, having dreamed about Emmeline, and Emmeline dreaming of her. And this was another thing that made no sense to me at all. Emmeline can dream the future, or whatever. Parts of her dreams are written down, and they just felt really silly to me. I just didn't understand the point of it at all. Sigh. And didn't understand her friendship with Matisa either. Wish I had.

I'm not sure what else to say about this book. So I won't say much more. I wish that it had been better, I wish that I had liked it more. But I guess this book just wasn't for me. Which is just all kinds of depressing, because I really thought I would love this series, as I loved book one years back, but not this time. Sigh. It's just depressing, lol. I wish it had been better. But it wasn't. I had lots of issues with this book. But I do think that maybe others will enjoy it a lot. And I do think you should give this trilogy a chance. If you wish.