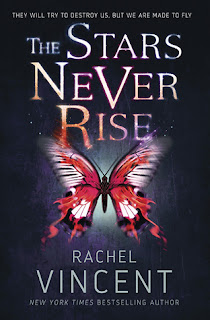 I have been meaning to read this book for months now. And now I finally got myself to do so. It is my second book by Rachel, I first read Menagerie, which I loved so much. I had seen some great things about this one, and I was so excited to read it. I must say that I liked it a lot. But I also had a lot of issues. Sigh.

I'm going to go with three stars for this book. Makes me a bit sad, but I don't think it was a four star at all. Because I really struggled reading the last fifty pages. I didn't find it exciting, like it was supposed to be. And I had some other issues too. Sad face. But I did like it. I didn't hate anything. It was a good book.

I found the writing to be pretty good, and so I had no issues with that at all. The cover is gorgeous. But I must admit that it makes no sense at all when it comes to the book. Shrugs. Still gorgeous, though. I'm not sure what I expected from this book, but it was different. I found the plot to be interesting and I liked the characters. Well. I sort of liked them. I did not love any of them, which was depressing for me. It is told from the point of view of Nina. I liked her at first. She's cute. But she's also pretty dumb, which bothered me a little. And gosh. Reading about her past.. it.. well.. it made me a bit angry. I felt sorry for her, but I was also a bit upset with her too. Sigh. I hated what the school had done to her body. So, so not okay. It bothered me.

I'm not even sure how to start with this plot. It is a lot. And it was interesting, but not the best. Yet I liked reading about it so much. This book takes place many years in the future. There are demons, who possess people. There is a Church in charge, controlling everything. Everyone has a soul, and they are running out because of the demons, meaning not every child born gets to live. It was pretty sad. Most things are forbidden. And the punishments for breaking the rules were pretty bad. Shudders. Not okay.

Nina had done so much to make sure her sister was okay. Stolen things. And other stuff too. Their mom is a bit crazy, and it was interesting to learn about all of that. I liked reading about her sister, she was a bit smarter than Nina, except not really, because she's pregnant. Which is so not a good thing in this world. So much happens after that. I'm not sure how to talk about it. Just, the Church is a bit crazy. And Nina will do anything to save her sister. It broke my heart a bit too, that she would give up everything.

Something happens that ends with Nina on the run. With Finn. And others. We learn more about the demons, which was interesting. We learn that Nina can make them go away, and I liked the way all of that was done. She is also not the only one, which made me happy. Most of this book is probably about her hiding out, trying not to be found. Which might be why I had issues with it. I felt like nothing much was happening. But then, a boy was burned to death. And it was seriously awful. No one did anything.

There is a bit of romance in this book. At first I liked it a lot. It was pretty cute. But then we learned something about Finn. And I just. I liked it, I did, because it was so different. But it bothered me a lot too. I just don't get how this can have a happy ending at all. It makes no sense. So, yeah. I'm not sure I liked the romance after all of that. But I did like Finn. I liked him a lot. And I do ship them. I just did not like his secret. Sad face. But oh, I am the most curious about the sequel, and what will happen with it.

There are a bunch of other characters in this book too. Like the friends of Finn. I liked most of them, except for Devi. She was not a nice person at all. And I, well, I hated her. I couldn't stand her. And my opinion about her will not change, not ever. She was just not kind at all. Ugh. I didn't like the way she was written. She could have been such a good friend for Nina to have, instead she was always talking shit to her. But the other people in their group was nice at least. I didn't love them, but liked them :)

Sadly, I don't have more to say about this book. I just don't know how to talk about it. The story was interesting, and I liked reading the book, but I did not love it. And I had some issues. But I'm glad I read this book. And I will be reading the sequel in some months, when it comes out. Because I do want to know what happens next. I'm just not that curious, to be honest. Just want to know about the romance, lol. The Stars Never Rise was good. Not perfect, but it wasn't a bad book. You should all read this book.