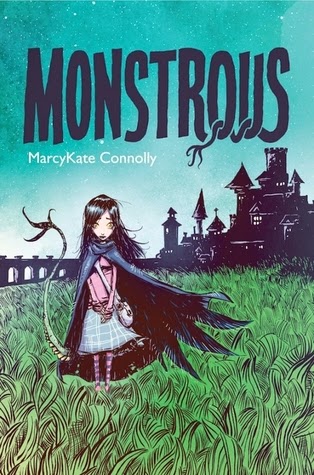 The city of Bryre suffers under the magic of an evil wizard. Because of his curse, girls sicken and disappear without a trace, and Bryre’s inhabitants live in fear. No one is allowed outside after dark.

Despite her caution, a boy named Ren sees Kym and begins to leave a perfect red rose for her every evening. As they become friends, Kym learns that Ren knows about the missing girls, the wizard, and the evil magic that haunts Bryre.

And what he knows will change Kym’s life.

Reminiscent of Frankenstein and the tales of the Brothers Grimm, this debut novel by MarcyKate Connolly stands out as a compelling, original story that has the feel of a classic.

I need February to get here soon. Because this book sounds awesome. I adore that cover. So gorgeous. And the book sounds awesome as well :D I just cannot wait to read Monstrous. <3 It just sounds beautiful. And heartbreaking. And evil. And so perfect. Fingers crossed for cute romance too, hih.
What are you waiting for on this monstrous wednesday?
Posted by Carina Olsen at 6:00 AM