Review: The Vault of Dreamers by Caragh M. O'Brien 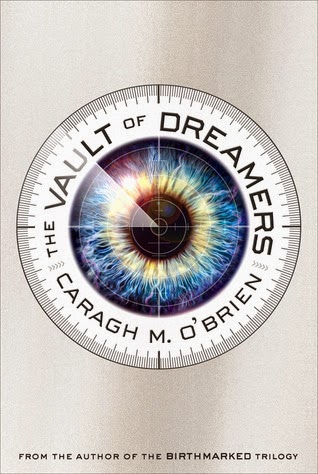 Oh, I tried. I really did try to love this book. But seriously. I could not. Not at all. I'm sorry to say that I didn't like this book one bit. And my review will most likely not be all that positive. Just saying. As I'm also giving this book a one star rating. If it weren't for my print ARC, I would not have finished the book.

I will try my best to explain how everything went wrong in this book. But honestly, I just want to forget about it all. And that ending was fucked up. Truly. So there should be a sequel. But it isn't confirmed yet, I think, but yeah. You cannot end a book like that. You can't. Well, unless she died. But I don't think so.

I just really wanted to love this book. But I knew when I peeked weeks ago that I would not. But I still gave it a try. Which I kind of regret. But still glad I managed to read the whole book. It just makes me sad. Because I wanted this book to be amazing. I have read other books by this author. A few I loved. A few I really disliked. So it's been a bit up and down. While this book was very, very down. There was just nothing I liked about it. Nothing. I could have loved Linus. But even he wasn't written well enough. I barely knew anything about him. And it wasn't enough. I'm sorry, but there were too many things to hate in this book. At least for me. I should say that I understand why some love it, but honestly, I don't. Because to me, it was awful.

First issue with this book. It has a weird beginning. I don't know anything about the world. I don't know that much about the main character either. I don't know enough about the school she had been in for nine days already. To me, it started in the wrong place. Sigh. And I knew from the very beginning that I did not like the writing. At all. Sniffs. It just felt so wrong. I didn't connect to anything. It felt like the girl was just telling us what happened. I got no feelings from anything. Which was very depressing.

Another thing was that this book is set in 2066. Seriously? I don't get that at all. Not a single part of the book said "future" to me. It felt more like the past. Nothing seemed different than it is now, which I know it will be in the future. So yes. That disappointed me too. Because seriously. This whole book is focused on this school. Where all the kids are being filmed 12 hours a day, and are getting sleeping pills and sleeping for the other 12 hours. It was fucked up. And boring. And way too much drama all the time.

I really wanted to like the main character. Rosie. But I didn't. I didn't connect to her at all. First, she spent the first nine days talking to no one. And then fifty people are going to get cut from the school. And now she's suddenly making friends with so many. She went through a lot of personality changes in this book. And I didn't like any of them. We see a bit of her past. Her family. I felt nothing. Nothing at all. Her stepdad is supposed to be mean and hit her. I felt nothing. He was described as two people.

There was just so much that pissed me off in this book. I just didn't like it. I didn't like reading it. I didn't like Rosie. I didn't like the other characters. I wanted to love Linus. I didn't. And suddenly there is a romance there. They are kissing. A lot. But they only kiss. They barely talk. They don't talk about themselves. They don't share things. My god. I did not like this romance one bit. And that made me even more sad. Oh, and there could even be a love triangle. Who knows. It wasn't in this book, though.

The plot. I cannot with the plot in this book. It kind of.. sucked? Yeah, it could have been interesting sometimes. But I didn't care. It wasn't enough. It wasn't done well enough. And Rosie acted like a crazy person so many times. And she changed so often. Oh, and she hears a voice in her head near the end. Which she tells no one about. That pissed me off too. And the school. Seriously. It was beyond boring. It wasn't interesting at all. Well, it could have been, probably. But I just did not care. I didn't care one bit.

The Vault of Dreamers was supposed to be creepy and scary, I suppose. But it wasn't. To me, it was silly. And I didn't like it. I wanted to, but I didn't. And that ending. Ugh. How much timed had passed in that last chapter? Weeks? YEARS? That is what pissed me off the most. It was a cruel ending. Not that I would want to read a book two. Sigh. But I wanted more from the ending. I expected more. But I didn't get anything that I expected from this book. Which makes me sad. But it is what it is. I did not like it.

Huge thank you to Ksenia at Macmillan Kids for the print ARC of this book. <3 I'm so sorry that I didn't like it. Sigh. But. My copy is gorgeous, hih. And I will always love that I were able to read and review it early. But yeah. I did not like this book. And I will always be honest, no matter how I get the book. So I'm not sure I can honestly say that I want anyone to read this. Because I mostly hated it. But I am curious. I am curious if there are someone who will feel the same as I did. So you must let me know if you read it.