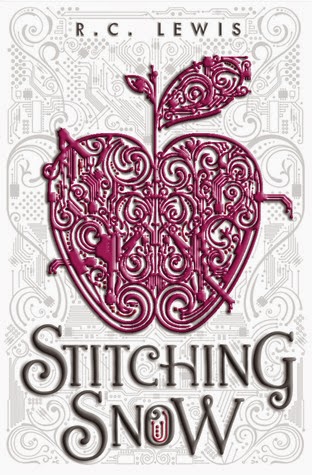 Her home planet is filled with violence and corruption at the hands of King Matthias and his wife as they attempt to punish her captors. The king will stop at nothing to get his beloved daughter back-but that's assuming she wants to return at all.

Essie has grown used to being cold. Temperatures on the planet Thanda are always sub-zero, and she fills her days with coding and repairs for the seven loyal drones that run the local mines.

When a mysterious young man named Dane crash-lands near her home, Essie agrees to help the pilot repair his ship. But soon she realizes that Dane's arrival was far from accidental, and she's pulled into the heart of a war she's risked everything to avoid.

In her enthralling debut, R.C. Lewis weaves the tale of a princess on the run from painful secrets . . . and a poisonous queen. With the galaxy's future-and her own-in jeopardy, Essie must choose who to trust in a fiery fight for survival.

There is a big chance that I am starting this book today. Well, I hope that I will. I think it sounds pretty amazing and I love that cover :D Was so excited when I got accepted via Netgalley. <3 I really hope that I will love this book. Fingers crossed. It reminds me a bit of Cinder, which I loved, so hoping I won't compare them too much. Because I also think it sounds different. Sigh. So excited to read it. <3
What are you waiting for on this sunny wednesday?
Posted by Carina Olsen at 6:00 AM