Review: Find Me by Romily Bernard 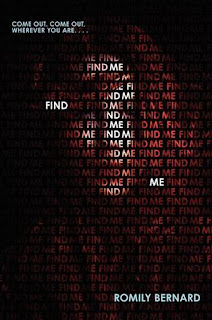 I've been wanting to read this book for some time, so I was really happy when I got accepted to read it via Edelweiss. But then I started reading it. And I did not like this book. I'm not sure I even liked one part of it. I don't know. All I know is that for me it's a two star, and my review might be a whole lot of negative. I'm sorry. But I'm being honest, and that's that.

I wanted to like this book. I truly did. Because it sounded amazing, and I do love the cover. But I guess I had my hopes set too high, because I could not get into this book, which makes me really sad. But that's just the way it is. I did not enjoy this book. Others probably will, but not me. I couldn't get into the writing or any of the characters. Didn't even enjoy the plot.

Find Me sounded like an awesome story, with some horror and romance and such. And it has that. But I felt like it didn't make sense, that the plot wasn't done entirely right. At least not to my eyes. For I could not enjoy the writing. Not sure why. I just did not like the way the characters talked, to each other and in her head. Not used to it. I'm also fine with some cussing, usually love it. But in this book I didn't like it, even though it isn't much, but it just didn't fit for me. Oh. I will sound so negative. I'm sorry. Sort of :)

I don't know how to describe this book. So I won't talk too much about it, and I won't talk too much about the plot either. It's about Wick and her life. She gets a dead girl's diary, where she finds the words Find Me. Would have been creepy, except it wasn't. And I felt like Wick's feelings about the dead girl, Tessa, were weird. I sort of understood them. But I just kept feeling like it was all so fake. And I'm sorry. But that is the way I saw it. It just was not for me at all. And it makes me a bit sad to think about it.

We learn lots about Wick and her little sister, Lily. They live with foster parents because their mom is dead and their dad is an runaway asshole. I don't want to spoil it, but yeah. I can't even say I liked reading about that either. Sigh. It could have been an awesome story, if it had been done better. Maybe. I'm not sure about it, to be honest. We didn't learn enough about their mom. Didn't think they thought about her enough. And I didn't understand the deal about their dad. Thought it a bit weird.

Wick is an hacker. And I didn't like that either, sigh. Although it was kind of awesome, what she could do. Just thought it was a bit too much, how she helps some people. I just did not like it. Then there is Griff, who is to be the love interest. Suddenly he's just so into Wick, and they are spending time together like they never have done before. I didn't get it. Felt like insta-love, yet there is very little romance. I failed to fall in love with the characters and the romance and the plot. I failed in all of it.

There is some mystery in this book. Although I found the book to be obvious at times, and although the murderer surprised me, I couldn't have seen it coming because it was a weird person to choose as the bad guy. But still. It was kind of exciting at times. But Find Me is not a book I will re-read. I'm sorry. I wish I could have loved it. But I did not. And I'm not saying anything else about the story; you'll just have to see if you decide to read it yourself. I think some might like it. I hope. I just did not enjoy reading it.

Thank you so much to the publisher, HarperTeen, and to Edelweiss for the chance to read and review this book early. <3 Even though I didn't like it much, I'll still be getting my pre-ordered hardcover.