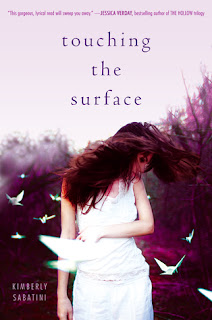 TOUCHING THE SURFACE BY KIMBERLY SABATINI

Experience the afterlife in this lyrical, paranormal debut novel that will send your heart soaring.When Elliot finds herself dead for the third time, she knows she must have messed up, big-time. She doesn't remember how she landed in the afterlife again, but she knows this is her last chance to get things right.

Elliot just wants to move on, but first she will be forced to face her past and delve into the painful memories she'd rather keep buried. Memories of people she's hurt, people she's betrayed...and people she's killed.

As she pieces together the secrets and mistakes of her past, Elliot must find a way to earn the forgiveness of the person she's hurt most, and reveal the truth about herself to the two boys she loves...even if it means losing them both forever.


Hardcover, 352 pages
Expected publication: October 30th 2012 by Simon Pulse
Pre-Order here.
I heard of this book via the YAmazing race a few months ago. When I won. Won the prettiest swag from this book, and a pre-order of it :D And I am really excited about reading it. Think the plot sounds great, and I adore the cover. Just, hoping there won't be a big love triangle like it sounds like.. :)
What are you waiting for?
Posted by Carina Olsen at 9:00 AM