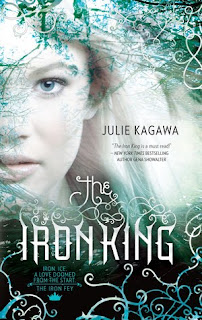 It has been such a long time since I first read this series. A little over a year now. And I have been wanting to re-read it ever since the fourth book, The Iron Knight, came out. But I just never have :\ Cause I still have not read it. But now I'm re-reading them all. :) And I cannot wait to read more about Ash, since he will forever be my favorite character in this series. This series is amazing.

But, well, I probably should not have re-read The Iron King right after having re-read The Immortal Rules. :) Cause, well, I liked The Immortal Rules so much better. Julie's writing is even more perfect in it. But even so. The Iron King is amazing. And I adore the characters. And I do like the writing a whole lot. And Julie has created such a perfect story world, and it is so easy to get lost in it. Loved that.

In the beginning of the book I'm feeling a lot of hurt and anger. But not at the book, or the writer. It's because of High School. And gah. I hated going to school myself, and things in this book is a bit too personal to me. Somehow. It is just awful, with Meghan and Scott. It is sad and cruel but it is also so perfect, because it's real. I mean, there is no romance. It's hate and humilitation because of a crush. And it's awful. I did not like it. But I also loved it. In a weird way. Was glad it was there.

Lets start by talking about the main character, Meghan Chase. She is an unique character. And special. But I do felt like she was a bit young; just turned 16. But I also remember being 16 and I did not feel young, so I didn't mind that much at all. :) Meghan is kind, and brave, and sweet. She is a great character. I might have been a bit mad at her a few times, but nothing very big. :)

She has one best friend; Robbie. A prankster. I didn't really like him at all. Just not my kind of character ;p Plus, he lied to Meghan so many times, about so many important things. And I did not approve of that. (Especially not in book two..) But I did like that Meghan had at least one friend. She is pretty normal, really. Until she turns sixteen and everything she knows changes.

Because this book is about Faeries. And it turns out that Meghan is a half-faery. And that was pretty cool. I mean, she's not very happy about it herself. But I thought it was awesome. Cause we got to know so many amazing characters because of it. Ash, Grimalkin. Sigh. Then there is Puck, the lying best friend. It is easy to see that he is in love with Meghan. At least to me. Did not approve.

Okay, I probably would have liked Puck if there had been no Ash. But since there IS Ash, Puck does not stand a chance. :) See, Puck is goofing around too much. Getting people killed and hurt and it's all kind of awful. I don't like it. And I didn't like Puck much. But I did think he was entertaining ;p One character that I did love, was Grimalkin. He is a cat. A talking one. The most adorable cat there is. Although, I'm not sure he would forgive you for saying so. I loved him a whole lot. :) Perfect character.

Then, of course, there is Ash. The Unseelie Prince. He really is perfect. Handsome, mysterious and broken. He can be a bit cold and cut off, but it only made me love him more. Cause he can also be so much more. Ash is gentle, deep inside. But he has been broken. And it is awful. And I hated it. But also loved it. Sigh. I adore Ash. And I love him and Meghan together. <3 More, please.

Anyway. Should also say something about the plot in this book. :) It is about Faeries. Like I said. Bad ones, some good ones. And lots of awful creatures as well. Not talking about them all, just know that they are horrible and fascinating. There are the Seelie court and the Unseelie court. Good vs evil. In a way. Personally, I found both to be kind of evil ;p There are lots of Faeries in this book. Loved that.

Then there are the Iron Fey. And those are even more different. Won't say anything about them, just that I loved reading about them and they fascinated me even more than the regular ones. Hih. This first book, The Iron King, is mostly about Meghan trying to save her little brother, Ethan. And I loved that. It is heartbreaking, but also sweet at times. This book is cruel. But I loved every moment of it.

And I wouldn't have it any other way. So excited to be re-reading this series. And to read the new Fey book coming out in a few months. Cannot wait for that. Anyway. The Iron King is an amazing book. It is exciting, and unique. It has some cute romance. And lots of action and some death. It is really great. And if you still haven't read this series, I suggest you get a move on ;)

I'm nervous about re-reading the second book again. Because of the love triangle. Well, it is kind of a love triangle. And I won't like it one bit. But, luckily, it is over quickly. I hope. But I am also excited to re-read the rest of the series. Cause I adore Ash. And Ash is a huge part of these books. <3