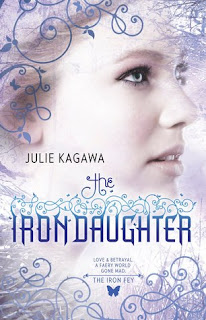 I do love re-reading this series. I am in love with the world Julie has created, and I love reading about all my favorite characters; Ash, Grimalkin and Meghan. And while I love the writing as well, I think Julie's newest book; The Immortal Rules, is written so much better. But even so. You cannot compare her books at all. They are too different. Just finished book two, The Iron Daughter. And while I did love it, I didn't love it as much as book one or book three. So giving it a four star. Will explain why. :)

This sequel starts where The Iron King ended. Meghan is now in the Unseelie court, all alone. Ash is there, somewhere, but he has gotten really cold and distant. And, well, to be honest, I kind of found Meghan to be a bit patethic in this book. Especially in the beginning. She was a bit clichè most of the time, with the whole I love you thing. Thought it was a bit too soon. But, even though I felt that way about her sometimes, I did still love her. And I could understand it; since she is only 16. :)

Anyway. About Ash being cold and distant. That is also explained early on. And to be honest, I didn't blame him one bit. I would have done the same. Sigh. I just adore Ash. He might be cold most of the time, but he is also gentle and kind and so damn sweet. It is impossible not to love him. I dare you not to. His brothers, though, are a different thing. We got to know them more. Rowan and Sage.

I actually did like Sage a bit. He seemed nice. But he wasn't there long. And Rowan I didn't like at all. Asshole. But I did like having them both in this story. :) Then, of course, there is Queen Mab, of the Unseelie court. And their mother. She isn't very nice. But, well, I kind of loved her still. She is evil and cruel, but I found her fascinating and interesting to read about ;p Need more of her, too.

Some might say that Meghan grows as a person in this book. And I might agree. A tiny bit. All the way at the end of the book. Cause the end of this book is my favorite part of it all. The end is sweet but also awful. And a cliffhanger. But it is an perfect ending, to be honest. In the beginning of the book, though, I didn't like Meghan. Thought she should work better at finding out her feelings.

There is kind of a love triangle in this book. I kind of remembered it to be bigger and more important then it was. Heh. But it isn't a big deal. Not really. Cause this book doesn't focus much on the romance. I mean, there is some romance. And I adored every moment between Ash and Meghan. But there was more plot in this book. And I did like that. So I endured the short triangle thing, too. :)

There is lots of new characters in this book as well. Won't talk much about them. But there is another Queen, and I didn't like her much. She's cruel and not very nice at all. But I liked reading about her, still. Then there was a new version of Ironhorse. And I adored him. For the most part. :) Then of course, Grimalkin. Smaller part in this book, sadly. But still so amazing. Loves him a whole lot. :)

Anyway. Back to the plot in this book. I'm not sure how to describe it without spoiling anything. So I probably won't say much. There is a lot more Faeries in this book. More Iron Fey as well. And it is all kind of horrible. But I loved it so much. The Iron Daughter is horrible. And amazing. And exciting. It has it all. But since I was a bit disappointed in Meghan I'm only giving it a four star. Still, amazing. :)

The Fey is at war in this book. Although we don't get to see much of this war. It's much bigger in the third book. I do find Puck to be an interesting character. But I still don't like him. He lies too often, about big things. So that kind of sucks. But I don't really mind, not at all. :) Ash, however, is just as perfect in this book. Still so broken. And I love that the most about him. I just adore Ash. <3

I'm not sure what else I can say about this book. It is an easy read, for the most part. :) And it is a great read, and I did love it. Super excited to re-read the next book now :D And then, finally, The Iron Knight. <3 If you have read the first book, The Iron King, then you really should read The Iron Daughter. Cause it is awesome and worth reading. :)

Goodreads - Buy it
Posted by Carina Olsen at 2:50 PM