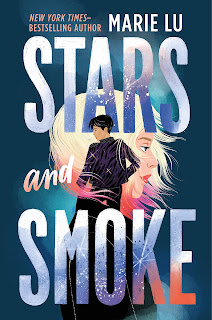 STARS AND SMOKE BY MARIE LU

The Hating Game meets Mission: Impossible in Stars and Smoke, a smoldering new novel from #1 New York Times bestselling author Marie Lu about a superstar tapped to become a secret agent and the reluctant young spy assigned to be his partner.

Infamous criminal tycoon Eli Morrison has just one weakness—his daughter, Penelope. And Penelope has just one wish for her nineteenth birthday—a private concert with Winter Young. When covert ops organization The Panacea Group approaches Winter with this once-in-a-lifetime chance to infiltrate Morrison’s inner circle, Winter must use his fame, cunning, and charisma to pull it off—only he won’t be on his own.

Posing as Winter’s bodyguard is the fiery Sydney Cossette, Panacea’s youngest spy. Sydney may be the only person alive impervious to Winter's charms, but as the mission brings them closer, she's forced to admit there's more to this A-lister than slick dance moves and a handsome face. Panacea's unlikeliest partners just might become its biggest heroes—and maybe even more—if they can survive each other first.

I have read a lot of books by Marie Lu. Not all of them, though. But I have, mostly, loved her books. A little meh about some of them, though. And yet I'm still willing to try what she writes next, ha :D Despite being a little unsure about this book. Not really my kind of plot. But the cover is stunning. And since it is Marie, I am willing to give it a try :) Now just hoping that I will end up liking this book, haha. But I think I might :)
What are you waiting for on this smoky Wednesday?
Posted by Carina Olsen at 6:00 AM