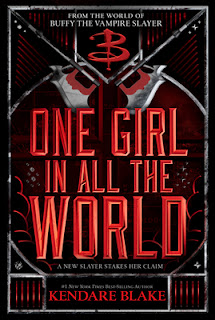 Goodreads Description:
New York Times best-selling author Kendare Blake takes us back to the demon capital of the world in this highly anticipated sequel to In Every Generation, set in the world of Buffy the Vampire Slayer.

Frankie Rosenberg is coming to terms with the fact that she’s the newest slayer, but that doesn’t mean she has it all figured out just yet. She and her friends are still reeling from the deadly attack on the annual slayer retreat—and the new revelation that some slayers may still be alive. She’s got her own Scooby Gang, but sometimes feels more on the outside than ever. She throws herself into training with her mom, the great witch Willow, and her new Watcher, Spike, but they’ve got demons of their own to contend with (both of the real and metaphorical variety). Buffy made it look easy, but being a slayer is hard—and lonely.

But Frankie doesn’t have time to wander through Sunnydale Cemetery singing about her new responsibilities. With news of Buffy’s possible demise, Demons are making their way back to Sunnydale in droves, called by a Hellmouth that is starting to reawaken. And then an oracle brings news of a new Evil brewing…something called The Darkness. Could this be what attacked the slayers? And is it coming for Frankie?

With a satisfying blend of fresh and familiar, humor and (stakes through the) heart, One Girl In All The World is a breathtaking continuation of the series that Booklist calls “a worthy successor to the Slayer stories” (Starred Review on In Every Generation).

I may not have read book one yet, aaack. But one day :D I'm still, of course, getting this second one. <3 It's Kendare Blake. She's amazing. And though I have yet to watch Buffy, oops, I will still read this series, ha ;) But hopefully watching Buffy soon too :) Been meaning to for ages. I'm sure I'll love these books :D
What are you waiting for on this slaying Wednesday?