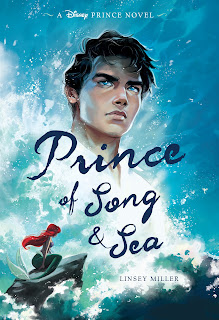 For fans of Twisted Tales and Villains is a brand new YA series that retells the classic Disney stories you thought you knew from the Disney Princes' perspectives.

Before Prince Eric’s mother, the Queen of Vellona, went missing two years ago, she reminded him about the details of the deadly curse that has plagued his entire life. The curse? If he were to kiss someone other than his true love, he would die. With a neighboring kingdom looking for any excuse to invade their shores, and rumors of ghost pirates lurking the seas, Eric is desperate for any information that may help him break his enchantment and bring stability to Vellona. The answers he has been searching for come to him in the form of a letter left from his mother that reveals Eric must find his true love, the one with a voice pure of heart,or kill the sea witch responsible for cursing him in the first place.

Now Eric is on a quest to find the Isle of Serein, the witch's legendary home. But after he is rescued by a mysterious young woman with a mesmerizing singing voice, Eric’s heart becomes torn. Does he enter a battle he is almost certain he cannot win or chase a love that might not even exist? And when a shipwrecked young woman with flaming red hair and a smile that could calm the seven seas enters his life, Eric may discover that true love isn’t something that can be decided by magic.
Hardcover, 352 pages
Expected publication: October 4th 2022 by Disney Press
Pre-Order: Book Depository and Amazon #ad
Do I want this just because of that cover? Ha. Yes, yes, I do :) But I read the summary too, and I think it sounds pretty awesome too. And I love the Disney movie of The Little Mermaid. So yeah. I will love this.
What are you waiting for on this legendary Wednesday?
Posted by Carina Olsen at 6:00 AM