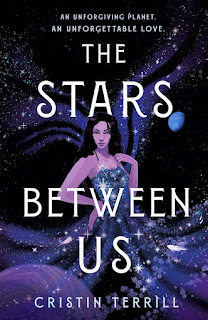 THE STARS BETWEEN US BY CRISTIN TERRILL

There’s always been a mystery to Vika Hale’s life. Ever since she was a child, she’s had an unknown benefactor providing for her and her family, making sure that Vika and her sister received the best education they could. Now, Vika longs for a bigger life than one as a poor barmaid on a struggling planet, but those dreams feel out of reach. Until one day Vika learns that her benefactor was a billionaire magnate who recently died under suspicious circumstances, and Vika has shockingly been included in his will. Invited to live on a glittering neighboring planet, Vika steps into a world she can hardly believe is real.

The only blight on Vika's lavish new life is the constant presence of Sky Foster, a mysterious young man from Vika's past who works for her benefactors. She doesn't like or trust Sky, but when she narrowly escapes an explosion and realizes someone is targeting the will's heirs, Vika knows Sky is the only one who can help her discover the identity of the bomber before she becomes their next victim. As Vika and Sky delve into the truth of the attacks, they uncover a web of secrets, murder, and an underground rebellion who may hold the answers they've been looking for. But Sky isn't who he seems to be, and Vika may not escape this new life unscathed.

In The Stars Between Us, Cristin Terrill sweeps readers away to a Dickensian-inspired world where secrets are currency and love is the most dangerous risk of all.
Hardcover, 400 pages
Expected publication: August 2nd 2022 by Wednesday Books
Pre-Order: Book Depository and Amazon #ad

I'm both excited about unsure about this book, haha :D I so enjoyed earlier books by Cristin. And I'm so glad she's publishing something new. But the summary feels a little messy for me, so I'm a little unsure. Yet really hoping that I will love this book. I will be buying it and trying it, haha :) As I think it looks great.
What are you waiting for on this glittering Wednesday?