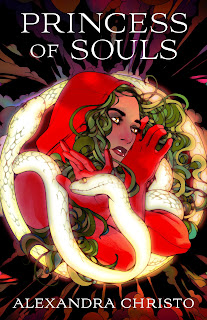 PRINCESS OF SOULS BY ALEXANDRA CHRISTO

From the author of To Kill a Kingdom comes Princess of Souls, a Rapunzel-inspired YA fantasy romance about a teen witch groomed to steal souls for an immortal king and the reckless, rebellious boy to whom her fate is tied.

For sixteen years, Selestra has been trapped in her tower on the Floating Mountain, preparing to take her mother’s place as the King's Witch, who foretells deaths in the Festival of Predictions. Outrunning your fate earns a wish and the chance to steal the King’s immortality. But die and your soul is forfeit. And though thousands have tried, nobody has ever beaten death.

A soldier in the King's army, Nox is an unlikely candidate for the Festival, but, driven by revenge, he is determined to steal the King’s immortality and kill the entirety of his court, starting with Selestra.

Yet when Selestra touches Nox in her very first prediction, their fates become entwined, and death seeks to take both their souls. Only by working together can they survive long enough to escape the dark fate and the immortal King that now hunts them.
Hardcover, 416 pages
Expected publication: October 11th 2022 by Feiwel Friends
Pre-Order: Book Depository and Amazon #ad
Eee! I am so very excited about this book :D I very much loved To Kill a Kingdom. And this new book by Alexandra sounds so good. Siiigh. I think I'm going to love this one a whole lot. Cannot wait to read it. <3
What are you waiting for on this fateful Wednesday?
Posted by Carina Olsen at 6:00 AM