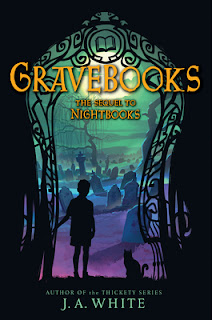 GRAVEBOOKS (Nightbooks #2) BY J. A. WHITE

Return to the world of Nightbooks . . . if you dare. Dead stories--and dead witches--are back to haunt Alex and Yasmin. To find a happy ending, Alex will have to write it, in this sequel to Nightbooks from acclaimed author J. A. White.

Alex thought he was done with witches. But when Natacha, the witch who held him captive for scary stories, appears again one night, Alex realizes he's trapped in a nightmare--literally. She's found a way to enter his dreams with a new, terrifying familiar named Simeon. And they once again want Alex to write. Transported to a story graveyard with best friend Yasmin, Alex will have to complete an original scary story each night.

But what does Natacha plan to do with his finished stories? And what makes a story good enough? While Natacha might have control of the beginnings, only Alex has the power to write the ending.

Readers can delight in a spooky story while also exploring the craft of writing alongside Alex. As he writes his own scary tales, he learns about plot twists, active characters, identifying originality, and accepting feedback, as well as dealing with writer's block--making this an ideal book to read for fun or use in classrooms.
Hardcover, 272 pages
Expected publication: August 16th 2022 by Katherine Tegen Books
Pre-Order: Book Depository and Amazon #ad
I'm pretty curious about this second book :D Yay for a new book by J. A. White. <3 I didn't really love the first book, ack, but I did like it. And I liked the Netflix movie too. And so I am pretty excited about this sequel :) I think it looks awesome and sounds like it will be great too. Fingers crossed that I will love it :)
What are you waiting for on this grave Wednesday?
Posted by Carina Olsen at 6:00 AM