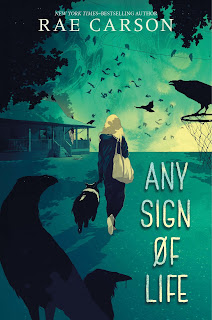 This book seemed all kinds of amazing and so of course I was going to read this. And I also adore this author, and I have read several of her previous books. And I am so glad that I read this newest book by Rae. As it was pretty much amazing. I did not fully love it, so I'm giving it four stars. But oh, it was a good book.

And that cover is so stunning. Going to try my best to share my thoughts about this book. Most good, a few complicated feelings too. And yet I very much enjoyed this story. I very much liked the characters. Writing was great too. And the story was pretty much awesome. A bit slow, could have been more scary, but so good.

This book begins with our main character, Paige, waking up. It takes her a little time before she understands that she has been in a coma for six days. When she also notices her family is not there. Until she finds them all dead in their beds. It was pretty heartbreaking to read about. She then discovers that the power is out. No hot water, but at least she still had cold water. There were crows and birds everywhere. Also the most awful stench. Which is how she finds out that everyone around her is dead. She cannot find anyone alive at all. Which, again, so sad to read about. I liked getting to know Paige. And her getting to know a world without anyone in it. Until she finds a dog trapped inside a home of an old woman she knew. Paige keeps the dog, a girl.

This is a story about a girl all alone in the world, not knowing what happened to everyone, why they are all dead. She's also feeling out of it, from being in a coma for six days. She is slow to heal. But she still plans on leaving, trying to find out if there are others alive. She was going to wait a few days, until she felt better, but then she had no choice but to leave, as her whole neighborhood pretty much burned fully up. Which broke her a little, to lose her family all over again, now with nothing to remember them by as well.

I liked reading about Paige and her dog, Emmaline, all alone in this new world. It takes place just a few years ahead of us. It's mentioned that corona has been, a few of the presidents as well. I'm not really a contemporary kind of reader, but I didn't mind too much about this book, as it was also about survival and the end of the world. Paige was a big basketball player, with a hopeful future. Now that was all lost to her. And her family dead, her best friend dead too. At least Paige has the dog with her, keeping her company.

Until she meets a boy, someone else still alive. And I liked Trey a whole lot. He was pretty adorable and I liked reading about him and Paige getting to know each other. There is a small romance, at it was cute. Though not happening until the end of the book. Paige is so happy to not be alone any longer, though it has only been a few days for her. Longer for Trey, since he was not in a coma. He got to witness the world ending, people dying, his family. Which was all kinds of heartbreaking for him. I did like him a lot.

We do not get to know a lot about what happened to the world at first. Not until they meet a few more people. Tanq was pretty awesome too and I adored her a lot. The other two were interesting, but not that great to me, haha. And that was all the humans we saw. Learning about what happened, why everyone died, was pretty great, I think. There was some danger, which I liked too. Wish there had been more. But it was good and I liked the twists in the story. I do wish I could have known even more, though. Lots more.

I will share a few of the issues that I had with this book, the reasons for why I did not fully love it. There is a lot of focus on Paige having been in a coma for six days, how she lost a bunch of weight. And I just. Ten pounds? That is not a lot of weight. And then a couple of weeks later, she still looks skinny? That seemed fully weird to me. Sure, I got that she lost some weight while in a coma. But I did not get how that would have changed her entire look, made others comment on it too. It was weird to me. As it was only six days.

I must also share that I had a little bit of issue with the writing. It was pretty much perfect most of the time, though. But it is mentioned again and again how the dog laps at her face. And it just feels so gross to me, haha. That's probably how it should be written, but yeah. It bothered me. And I had some issues near the end, where there was too many explanations. Made me lose a little focus, as it got boring fast. Oops. But liked it too, was just a little too much. There were also some medical words I didn't understand at all. Ack.

But for the most part I really enjoyed this book. Any Sign of Life was a great survival story with amazing characters. I liked reading about the world having ended. The ending was kind of open, so I'm curious if there will be another book, as I would read more for sure. Huge thank you to the publisher, Greenwillow Books, for the auto-approval on Edelweiss. So happy that I could read this book early. And I will for sure be getting the stunning hardcover of it too. I think that you all need to read this book as well. So worth it.