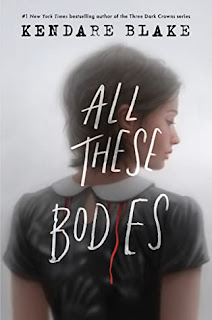 ALL THESE BODIES BY KENDARE BLAKE

It starts with a lone victim, found on his front porch with his throat cut and his body drained of blood. By the time it’s over, the Bloodless Murders leave a trail of sixteen bodies littered across the Midwest, with no suspects and no witnesses. Only questions: how were the victims chosen? Why didn’t they fight? And where, where is all the blood?

Michael Jensen yearns to become a journalist and escape his small-town life. He never imagined that the Bloodless Murders would come to sleepy Black Deer Falls, not until the night in September when the Carlson family is murdered in their farmhouse. The only suspect in the case is found with them in the house that night: fifteen-year-old Marie Catherine Hale, unharmed but covered in blood. She claims the murderer abandoned her at the scene, and though her story is suspicious, no one believes her capable of committing the crimes on her own.

When Marie refuses to talk to anyone but Michael, he agrees to record her side of the story. But how can he trust her confession when it calls into question everything that he holds to be true?

Marie knows that her time is running out. But she chose Michael for a reason, and his search for answers gives her one last chance to tell her truth.
Hardcover, 416 pages
Expected publication: September 21st 2021 by Quill Tree Books
Pre-Order here and here #ad
EEEE. I am so goddamn excited for this book :D Ahh! Kendare is the best. And I love her books so so much. <3 And oh my gosh. All These Bodies sounds like perfection. It looks gooorgeous. I love that cover so much. Sigh. It's precious. And sounds like such an amazing story :D I know I'll love this one most. <3
What are you waiting for on this bloody Wednesday?
Posted by Carina Olsen at 6:00 AM