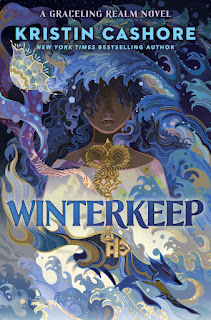 When this book was announced I was beyond happy. Because it meant more from this most amazing Graceling world. And more of Bitterblue too. And so I simply had to re-read the trilogy before this came out. I am so glad that I did so. And this new book was all kinds of incredible. I could not stop reading once I started this.

Winterkeep was all kinds of exciting. The writing perfection, all of the characters amazing. I just love this world so very much. And in this new book there is a newer world again. Different people and customs. And different creatures too, which was all kinds of fun. Giving this precious book five stars. As it was fully perfect.

There is so much going on in this book. I don't know how to even write it all down. Will try not to share too much, but will be writing about what happens early on, which is what this whole book is about really. It takes place around four years after the ending of Bitterblue. And it starts with her, which I so loved. She is still all kinds of amazing. A little wild, but I adore her so. We get to learn that they found out about a new place a few years back, called Winterkeep. And they have been in contact with them for a while, learning their language. Bitterblue sent some of her people over there. And now they are missing. Then she also finds out that this new country has been tricking her, buying cheap rock from her mountains and without letting her know that it was a special type worth so much more than what they gave her. So rude.

Which is how this book begins. With Bitterblue deciding to finally visit Winterkeep herself. Taking Giddon and Hava with her across the sea for weeks. Oh, getting to know this new place was all kinds of amazing. The people were different. Their town was way different, much more advanced. They had magical blue foxes, who sometimes bonded with humans. They were every kind of fantastic. I loved that one blue fox had his own point of view. They were smart, able to communicate with their mind. I loved them to pieces.

There was another point of view too. A creature called the Keeper. Though she did not see herself that way, instead it was some other ocean creatures that kept calling her the Keeper, their hero, savior of the world. And yet all that this monster wanted was to be left alone with her sunken treasures. We don't read a lot from her, but enough. And I very much liked this creature. She was important to the story too. The other ocean creatures were the silbercows. Getting to know more about them too was the best. So cute.

There was Bitterblue's point of view too, but also from Giddon. I still feel a little unsure about him. He is older than Bitterblue. And this book was very much about them growing closer, maybe starting something together. I did like him. I'm just not sure if I fully loved him. He was no Po or Brigan for me, haha. But still adorable and I loved his love for Bitterblue. Their friendship was also the cutest, so that was good. This begins with Bitterblue falling out of their ship when they are almost in Winterkeep, which no one witness.

And there she almost drowns. Until the silbercows rescue her. And then people in an airship rescues her from the cold, taking her away from the ocean. But those people were not nice. And they kidnapped her. With Giddon and Hava believing she was dead. For weeks. Which was so sad. I will say that there was so much crying in this book. Which I don't mind at all, bu yeah, there was a lot of it. Maybe too much. But it did make me love the characters more, of course. And they did have their reasons for crying so much.

It was worst for Bitterblue, though, being kept locked up in a attic somewhere. And then there was Lovisa. The sixteen year old girl living in Winterkeep. Daughter of two important people in this world. Her life has not been easy, with an unkind mother. And trying to keep three little brothers safe. I loved getting to know this girl. I loved getting to know her life and her friends and her family. She was so special to me. Broken, but brave and amazing. Her life changes so much during the three weeks of this book. Was a little crazy.

I have written so much about this book, and must still share a little more. It is centered around Bitterblue being kidnapped. About Lovisa learning dangerous secrets about her parents. About her trying to decide what the right thing to do is. It is about the blue fox and the other creatures too. It was such an amazing story and I loved it to pieces. The characters were great. The world was incredible. And the heartbreak at times ruined me a little. I did not love it as much as I loved Graceling and Fire and Bitterblue, but close.

I must confess that I'm a little sad that there was no Po and Katsa in this one. There is only a mention of their name, that they aren't at least dead. But yeah. I missed them so, and really wanted to know more about them. So once again I am crossing my fingers that there will be more Graceling books after this, ha. I would love it so. But even though I did not get more of my favorite characters, there was a lot more of Bitterblue and Giddon and Hava. And I very much loved that. Their friendships were so great to see.

Another confession. I love that this book was very open about sex. But I will also confess that I did not love that Bitterblue seemed to have new lovers at all times. And that Lovisa also slept with all kinds of boys. She was just sixteen. And she did it because she felt like she must at times. Which broke my heart. But I did like how open this book was about it all. Though I don't agree personally with sleeping with so many, either boy or girl, I didn't mind it. And I loved these two girls beyond anything. They were precious.

Winterkeep was pretty much everything I could have wanted for another book set in the Graceling world. I loved it beyond words. It was so exciting and thrilling and so very incredible. I loved every moment of it. It was sad and dark at times, but not as dark as the other three books. I loved the new characters, though missed the old ones so. The blue foxes were the most amazing and I would love to read more about them too. This whole series is completely perfect. And I love these books so much. You must read all of them.