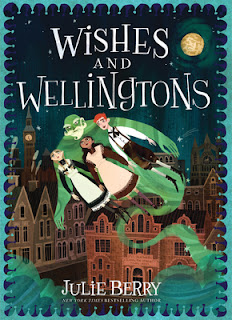 Feeling conflicted about how to rate this book. Unsure about three or two stars. Sadly I have to go with two stars for this. I tried so hard to love it. But it was simply not for me. Parts of it were great, though. But couldn't get past the writing and how annoyed I was by the main character. Sigh. I am sad about it.

As I really did want to enjoy this one. I was so lucky to win a signed ARC of it. Which looks gorgeous. And the cover is so stunning. I also very much liked the setting, set around 1896. I liked the idea of a djinni in a sardine tin. I liked the sound of great friendships. But I was sadly mostly disappointed with it.

I will not be writing too much about this book. I'm only writing down a few of my thoughts about it. I do think that others will probably love it, which is always the case with books. But for me, it was not good enough. I so adore reading middle grade books. Which is why I was sure I would love this one. But it felt so much younger than what it was. Main girl was thirteen years old. She felt years younger. I do not mind young books at all. But she was supposed to be thirteen. Yet she acted so badly. She was so very stupid for almost all the book. She was mean and rude. Book says feisty. I did not agree most of the time. Maeve was always thinking bad things about people around her. And she wasn't all that nice towards her two friends either.

This book tells the story of Maeve. A thirteen year old girl spending her time at a school for young ladies. Her only friend being her roommate, Alice. All Maeve does at this school is complain. And causing much trouble. It felt like every girl was supposed to be evil. It was a bit too much for me, the whole pettiness of it. Especially with how much she complained about her family too. She was always causing trouble with this one girl. Sure, the girl was awful, but so was she. She was always causing trouble with the teachers.

I wish I could have loved Maeve. She was interesting. But sadly nothing special to me. I liked her friend Alice. But their friendship felt a little thin to me. Then they got to know the orphan boy across the street, Tom. I sort of liked him. He was fourteen. And seemed younger than ten. It was weird, their ages. I sort of liked their friendships too. Except for how Maeve was lying to Tom, and how that never really mattered. A few other characters in this book too, a few of them interesting, most of them not. Sigh. I did like her dad.

This is a book about a djinni. Maeve is cleaning trash outside as punishment for one of the bad things she always did. Then she finds a tin of sardines. She's about to eat it, but something else comes out  instead. A djinni. A man who can grant her three wishes, anything she wants. She was so excited. And I thought it seemed great too. Until she makes her first wish. It was beyond childish and stupid and careless of her. And sadly made me dislike her a bunch. Sigh. She mess up the second wish too, that was more exciting.

There is a small desert adventure in this one. It lasted for, what, an hour. And is then not really mentioned again. There was an evil sorcerer. Whom we never see again. The djinni was all kinds of rude and full of warnings and threats. That never happened. I simply wanted more from this book. More adventure, more fun, more danger. There was too little of everything. Simply too much of Maeve being stupid and arguing with people around her. I did very much dislike the writing. It was mostly bad and weird, I'm sorry to say.

I really wish I could say that Wishes and Wellingtons was an amazing book. But it really was not. I wanted it to be full of adventure and exciting things. And it was not. At least I did not think so. Others may love it. But I sadly did not. Tried my best to write down all my thoughts about this book. But it's hard to find words when you do not love a book like you thought you would. It's a sad feeling. At least the cover is gorgeous. Though Maeve and her skin color is never mentioned. I wish it had been talked about. I wanted to know.