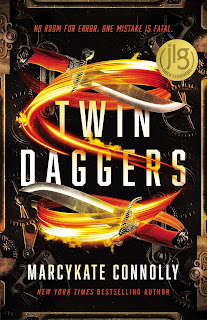 Although it breaks my heart a little, I have to give this book two stars. I truly tried my hardest to love this one. But I simply did not. And I have a whole lot to share about it. While trying my best not to be too negative. As there were parts of this book that I did like. It was a mix between two and three stars. But closer to two stars.

It is heartbreaking to me, as I am huge fan of MarcyKate. Have adored her for years and own all her books and have read them all too. Have enjoyed them all very much. And I will of course still continue to buy and read books by her. As she is awesome. And although this book was not for me, I'll not stop reading her books.

I will try my best to share all my thoughts about this book. But I will also try not to share too much. Just enough. I so wish I could say that I loved this one. Sigh. But that just wasn't the case. Still. I am glad that I read it. And I will still be reading the sequel, since I do very much want to know what happens next to the characters. I just also had many issues with this story. Which makes me sad. But, oh well. It is what it is. I did not like this one much and I will be sharing why. I shall begin by saying that I had issues first with the writing. It wasn't bad, not fully. But I was not able to connect at all. I felt nothing for these characters. It felt like this book was only telling never showing. It felt stiff most of the time. The main character did not feel real to me. Which made it even harder for me to enjoy this book. I so wish I had loved the main girl.

It took me forever to read this one, as I could never ignore the writing. Which made me feel like the book never ended. Which was so not a good feeling. But it was not all bad. I did like the world created. I was curious about the magic and the techno parts. But some parts were a bit too much for me. It was like all Aissa thought about. How bad the technocrats were, how they killed all the magi one hundred years ago. And kills them still if they find them. Which was so horrible, of course. And exciting to read about at times.

But I did not like the way Aissa was thinking about all of it. Sigh. There was too much focus on certain things. How she would do everything for her people, and things like that. Then the romance happened too. How she fell for a technocrat. Her people's enemy. She is always thinking about that. How she and him are not meant to be. This book is said to be a somewhat Romeo and Juliet re-telling. I saw that, but not much. It was insta-love. Which I don't mind, but felt like I never got to see them actually be together.

Oh, and there was another boy. A childhood friend, another magi person like her. Whom was totally into her. But all she could think of was the other boy. And yet she cries into his arms. She spend a night out in the wild curled up into his arms for warmth. Yeah. It was very much almost a love triangle. Shudders. But not really that either, as nothing happened, not yet, at least. Sigh. But anyway. I wish I could have loved her romance with Aro. I just did not feel it. Not one bit. I liked him, I liked her, but loved none of them. Oh.

Another part of this world I liked was the story of the Heartless. Babies being born without a heart. Having to get a clockwork heart put into them from birth. And then a new one each year, before that killed them. Though they barely lived more than twenty years even so. It was heartbreaking yet so interesting to read about. And I liked learning more about that. There were also small magic parts in this book. I liked that a lot too. I wish there had been more focus on it, as I wanted to know way more different spells and such.

This book tells the story of Aissa and her twin sister, Zandria. Magi spies living in a world that hunt their people down. Trying with their people to take over again, to get their place back. But it is not as simple as that. Full of different twists and such. Secrets that were not really secrets at all, that I felt like the main girl was stupid for not figuring out. A lot of those. Gah. I kind of disliked their parents. Since they were never there. Barely spoken of. I sort of liked Zandria, but we barely saw her as well. This was the story of Aissa.

There is much I could say about this book. And I have already said enough. Yet barely even mentioned the plot. Oops. It bothered me that Aissa never figured out all the secret things. They were all so obvious. Some things were too convenient. There were mentions of her seeing torture. It was kind of dark, yet I felt nothing. I wish I had felt something while reading this book. But I just did not. Which still makes me sad. As I really did want to love this. But I tried. I wanted to know what would happened, just didn't care much.

Even though Twin Daggers was not everything I had hoped it would be, it was still a good read. It was still a good story and I am glad that I read it. I just wish it had been better for me. And I know that others will love it. Which is always the case. But yeah. Sadly this book was not for me. Still going to read the sequel, though. And hoping that I will love that one more. As I must know what happens next. But wishing I was more invested as well. How rude. Still. This book looks stunning and so thrilled to own it for my collection.