Review: Cracked Up to Be by Courtney Summers 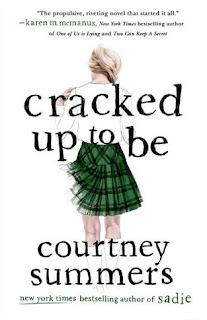 Another Courtney book I had been meaning to read for so long. I finally had the chance to read it. And I am so glad I did. Because this book was all kinds of good and heartbreaking. Four stars, as a few small things bothered me, but gosh, this book was good. I simply could not stop reading it. And I had to know how it ended.

Which was kind of rude, haha. I did love the ending. But it was so very bittersweet too. And it made me badly want a epilogue. Sigh. Having trouble finding the words for this book. Will share a little of what I loved about this, which was a whole lot. I found the writing to be great. The characters were so flawed I loved them all, haha.

This book tells the story of Parker. She is six months away from graduating high school. For many years she was the perfect girl. Popular, smart, behaving. Never made a mistake. Until one day she did. And she hasn't been able to really live with herself ever since that one party. And so for months now she has gotten to be the very opposite of what she had been for years. She started to drink often. Not doing her homework. Making everyone hate her. She was horrible. And still is through most of this book. Which was heartbreaking to read about. Because despite all the bad things Parker did, I still adored her. And I felt so sorry for her. Parker was not an easy girl to care for. Yet I cared for her anyway. She wanted everyone to leave her alone. She wanted to suffer.

It takes a long time before we finally learn what truly happened that day at the party a few months back. And it was such a sad story to know. But so good too. But I also wish Parker had told someone about it, long before she did. Which made me dislike her a little bit. But I also understood why she didn't tell. But yeah. It was sad. And so exciting trying to figure out what had actually happened at this party, how it had all gone wrong. Though, also, all of the drinking was a bit too much for me, as in, not really for me, haha.

This book is all about Parker and her life. It starts months after she began ruining her life. We slowly get to learn things she has done. Many of those things were so cruel of her. Yet I could not help but adore her anyway. Hmph. We learn about her past and what happened that day and how it affected her. She suffers a lot. From panic attacks and so much anxiety. Which hurt my heart. But was written well too. I did not like how she hurt her parents. But I understood her need to be alone. But oh, it was so sad at times. So rude.

Then there is a new boy in her school. And he cannot seem to stay away from her. No matter how badly she treats him. Which is very bad indeed at times. How rude. He begins having feelings for her. And they somehow start getting to know each other. When she isn't lying. All Parker wants is to be alone. Yet she kind of want to be with Jake too. And I shipped them so much, haha. There was also her ex, Chris. They had been together for years. A bit of drama, but no triangle. I liked Chris. And I really did not like him. Ha.

There is a lot going on in this story. We learn so much about Parker. And I adored her so; every broken part of her. I may have wished that she had made some different choices, but I adored her even so. And I wanted her and Jake together so badly. But I also wanted her to get help, which she badly needed. This book was kind of hard to read at times. But it is important. And I liked that a whole bunch. We get to read about Parker slowly getting better, sometimes. We get to know her life. And I honestly liked that so much.

I will say that contemporary books are usually very much not my thing. But that is so not the case when it comes to books by Courtney Summers, haha. She can make me read any genre. And I love that so. She creates the very best broken and flawed and perfect girls to read about. So much so that I can ignore the silly school things, haha. Well, for the most part. Some things were a bit too silly and stupid. But I loved the story too much to care much about it. But I will say that the dog scene was fully rude and evil. Hmph.

It took me years to finally read Cracked Up the Be. And it was so worth the wait. Though I do wish I had read it earlier too. The book was all kinds of rude but so great too. It came out over ten years ago. And it just came out again with a new cover. I love them both. And have been a fan of Courtney for years. Now only have one book left to read, then I'm all caught up on her stories. Rude. I want so many more books by her. She is such an awesome person and writer. If you have not read her books yet, then get reading.