Review: The Mystwick School of Musicraft by Jessica Khoury 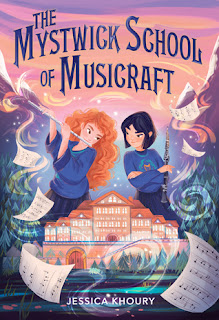 Feels like I have waited forever to be able to read this gorgeous thing. Have been a fan of Jessica for years and was so excited she was going to write a middle grade story too. It also looks so stunning. And sounded amazing. Which makes me even more thrilled to say that it was pretty much perfection. I enjoyed it so.

The writing was very good. The characters were great to read about; I adored them all. And the music world created was so special and so interesting to learn more about. I also liked the school a lot. The way the magic worked was so well done too. Most of all I loved Amelia. She was my favorite part of all of it.

There is so much to share about this book. I shall try my best to only write down a little bit, haha. Giving it four stars, as I adored it beyond words, but felt a little hurt about how hurt Amelia was. Hmph. It hurt my heart a lot. But yes. This book was truly good. And I enjoyed it very much. Sigh. It tells the story of twelve year old Amelia Jones. She lives in a small town with her grandma. Her mother died eight years ago, and her grandma pretty much never talks about her. But Amelia knows that she went to a big school for magic. And so she spend years practicing magic with her flute, becoming really good at it, all to try to get accepted into this school. Which is not an easy thing to get accepted for. Only the best gets in. The day of her audition do not go very well.

Everything goes wrong. Even her audition does not go well, after she gets nervous. And so Amelia is sure she will get rejected for her dream school, to become as good as her mother was at music magic. But two weeks pass. And she gets an acceptance letter. A month later she gets picked up for her new school and in such an awesome way. Loved the way they travelled by music spells. It was thrilling to read about. She meets some of the kids she will go to class with. Amelia was so beyond excited for her new school. Sigh.

But this was not meant to be at all. She arrives at her school. And her new teachers inform her that she did not get in at all. Another girl named Amelia Jones was accepted, but she died the day the letter went out. And so this Amelia only got in by accident. They don't think she is good enough for this school at all. And want to send her home again. But by another accident she had played music for some special trees, and they welcomed her, so she cannot be kicked out. Not yet. She get two months to prove she belongs.

Which is how this story begins. And oh gosh. It was such a good story. But it was beyond sad too. Amelia was such a special girl and I adored her so. But her story was not all happy. I so did not like the way her teachers treated her. Or the way some of her classmates treated her too especially her roommate. Hmph. And although Amelia loves music so much, she starts to struggle at school. She try so hard to be perfect. But she struggle more and more. Which was so sad to read about. Oh. But so real and I loved it the most.

This book tells the story of Amelia. How she gets in at her dream school by an accident. How she tries so hard to belong, so they will let her stay. How things do not go the way she had hoped they would. Which was so sad to read about at times. I wanted all the best things for this girl. And felt like she had so many bad things happen to her. Oh. But she was still so sweet and kind and strong. Loved her so. Anyway. She only really makes one friend. Jai. Whom was all kinds of adorable and kind, and I shipped them so, haha.

It is a book about music. How music make magic happen in this world. Music can heal. Music can hurt. It can make things grow. Music magic can basically do anything. And it was so thrilling to read about it all. I loved this part of the story. And I loved how badly Amelia wanted this school. And I loved her making her music. Sigh. There are even ghosts in this story. Well, one. There are friendships. And enemies. We see Amelia taking her music classes. Which was so interesting but so hard to read about too. My poor heart.

Giving this book a four star because I'm a little bitter about how mean everyone was towards Amelia. And how they did not make it up to her at the end of the book. There should have been some groveling, haha. Simply felt that Amelia deserved more from all of them. But besides this, I did not have a single issue with this book. I loved it a whole lot. But gosh, the ending happened way too soon. There is still so much more I need to know. And so I am just waiting for an announcement of more books. All my fingers are crossed.

There was so much happening in this book. And I haven't written down most of it. All of it was so good to read about. I only wish there had been even more at the ending. But yes, I'm thinking there will be more books. The Mystwick School of Musicraft was everything I hoped it would be and more. It was so thrilling and sweet and sad too. I adored these characters beyond words. Amelia was the very best. You all need to read this adorable middle grade book too. It was full of heart and soul. I simply need more of all of this.