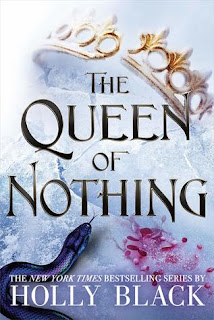 The finale to the New York Times bestselling Folk of Air trilogy, that started with The Cruel Prince and The Wicked King, from award-winning author Holly Black.

After being pronounced Queen of Faerie and then abruptly exiled by the Wicked King Cardan, Jude finds herself unmoored, the queen of nothing. She spends her time with Vivi and Oak, watches her fair share of reality television, and does the odd job or two, including trying to convince a cannibalistic faerie from hunting her own in the mortal world.

When her twin sister Taryn shows up asking of a favor, Jude jumps at the chance to return to the Faerie world, even if it means facing Cardan, who she loves despite his betrayal.

When a dark curse is unveiled, Jude must become the first mortal Queen of Faerie and uncover how to break the curse, or risk upsetting the balance of the whole Faerie world.

So. Confession. I have not read The Cruel Prince yet. What! But I own both books, haha. I even own the gorgeous US ARCs of them both too. Oops. And I am beyond excited to read all three books, after I get my pre-order of this one too. Eee. I adore Holly. And so many of you have loved these books. And so I'm waiting for this third and final book, so that I can finally read this series too. I hope I will love them too :)
What are you waiting for on this cursed Wednesday?
Posted by Carina Olsen at 6:00 AM