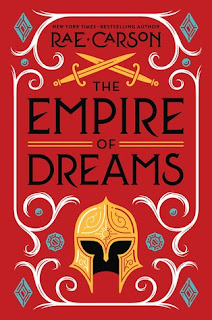 THE EMPIRE OF DREAMS BY RAE CARSON

New York Times-bestselling author Rae Carson makes a triumphant return to the world of her award-winning Girl of Fire and Thorns trilogy in this extraordinary stand-alone novel. With action, adventure, and a heroine set on destroying the patriarchal limits meant to keep her in her place, The Empire of Dreams once again proves that Rae Carson is a master of epic fantasy.

Even though Red Sparkle Stone is a foundling orphan with an odd name and a veiled past, she's about to be adopted into the royal family—by Empress Elisa herself. Sixteen-year-old Red can hardly believe her luck. Then, in a stunning political masterstroke, the empress's greatest rival blocks the adoption, and Red is left with no family and no future.

Grieving and lost, but determined to find her place, Red hatches a daring plan: she will prove herself as a recruit for the world's most elite fighting force, the legendary Royal Guard—something no woman has done before. But it's no coincidence that someone wanted her to fail as a princess, someone whose shadowy agenda puts everything she loves at risk. As danger closes in, it will be up to Red and her new friends—and maybe some new enemies—to save the empire. If they can survive recruitment year.

Eee! I am SO excited about this book :D I adore Rae. And I so loved her Girl of Fire and Thorns trilogy. Though, gosh, it has been so long since I read it. Hmm. Must do a re-read soon :D Anyway. I cannot wait for this book set in the same world, a little after the trilogy. Ahh. It sounds so good :D I shall love it most.
What are you waiting for on this dreaming Wednesday?
Posted by Carina Olsen at 6:00 AM