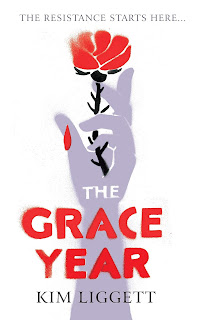 I did not expect this book to completely mess with my head. I knew I would most likely enjoy a whole lot. Which I did. But gosh, how it ruined me too. This book was all kinds of exciting and thrilling and beyond rude as well. I'm giving it four stars as it was almost perfect to me. I stayed up until two am to finish as I could not stop reading.

There is so much I wish to share about this one. Yet I have no idea how to write down most of my feelings. This story ruined me a little. The writing was all kinds of good, which I am so happy about. This world was interesting to learn about. The customs the people had in their small village was the worst but very exciting to read about.

The Grace Year tells the story of sixteen year old Tierney. She lives in a village where men control pretty much everything. The women aren't allowed to do much at all. There are rules for how they must wear their hair. There are rules for what they can and cannot speak about. They are not even allowed to dream. They are not allowed to spend time with each other. All they are to the men are breeding machines giving them sons. If any of the women break these rules, they are hanged. All of these rules killed me. The way these people lived was the very worst thing. But so very interesting to read about. I loved that. But gosh, how I wanted better for them all. These women had the most depressing lives. But most were used to this, accepted it. There was nothing else they could do.

But Tierney did not want this life. She did not want to be a wife and have children. Women were made to work if they were not chosen to get married. Which the men chose, the women had no choice at all if they were to get married or not. The year the girls of this village turns sixteen they are sent away for a whole year. The Grace year. Before they get sent away, the boys that are not married chooses a girl they want to marry when they come back again. The girls get no say in this. Which was all kinds of heartbreaking.

This book tells the story of Tierney. How she is preparing for her Grace year, sure she will not have to be a wife, as she have kept everyone at a distance her whole life. But when the day comes before the girls leave for their Grace year, she's chosen by a boy. And she is not happy about it at all. Honestly, though, I liked this boy a whole lot. But I also understand how betrayed she felt. This was how things were in this world. And so I did not blame this boy for choosing her to be his bride, if she were to return a year later.

Which was not certain at all. Because the Grace year is the worst year for the girls. Many of them never makes it home. Unless it's in a bottle, being sold for their magic. The men believes every girl has magic. That they need to be sent away for a year to rid themselves of this magic so they are ready to be married and start their life with the men. All the girls believe this to be true. That when they go away they will all finally learn their magic, and how to get rid of it before returning home. This was all kinds of complicated.

There is so much going on in this book. I do not know how to describe it. And so I will not say too much more about it all. But gosh this book was exciting. It was all about surviving and trying to be better, braver, stronger. The girls arrive at the place they must stay for a year. Two girls already dead before they arrive there after two days of walking. They are being hunted by poachers who will skin them alive for days, to sell their body parts for money. But these poachers were not the worst thing they had to fear in this year.

The scariest thing were the girls themselves. And how they treated each other. It was so heartbreaking to read about. Yet kind of exciting too. But gosh, how angry it made me. And how sad it made me too. There was the mean girl, hurting everyone around her, yet she was still the most popular girl there. There was another girl, Gertie, who was all kinds of sweet, yet so broken. Her story pretty much killed me. It was so good. But the scenes near the end. Gosh. My poor heart. This poor girl. I adored her so very much. Sigh.

This book is filled with death. It starts with thirty three girls going away for their Grace year. So many of them die. And so many of those deaths were included in this book. Shudders. It was fully interesting to read about, but so very sad as well. I feel like my review is all kinds of messy. And too long. But gosh. I'm blaming the book for that, haha. It messed with my head. I loved reading about Tierney and her journey. Getting to know the girls was so good. They were horrible at times but could be better too. Complicated.

There was one thing about this book that I did not really like, which is why this is a four star for me. The romance. Tierney ends up being rescued by a poacher, one of the men trying to kill all the girls. Ryker makes sure she doesn't die from wounds she has. And time is moving so fast, it's suddenly been many weeks, and they are supposed to be in love with each other. But we did not get to read about this. At all. How it happened, anything. So much was missing. And so I did not believe in this romance at all. Sigh.

Though, honestly, it might also be because I very much wanted her to be with Michael, which she was supposed to be when she got home from the Grace year. Michael seemed like he was a great boy and I adored him so much. Sigh. He had some faults, but those were not really his fault. This whole romance thing was tricky and a little complicated too. But yeah. I did not like her with Ryker. I wish I had, but there was no spark there at all. Not to me. The story was so interesting, though. And how it all ended killed me.

Because that ending was the rudest thing of all. I'm not even fully sure what happened on the last page. Okay, it seemed clear what happened, but I'm hoping that I read it wrong. Sigh. Because I was not okay with that final page, haha. The rest of it was pretty amazing, though. But the resistance did not take place in this book. At all. And it seemed like it would be many years until it would finally happen. I'm so beyond desperate for another book after this. As I would very much love to read about the real resistance as well.

One thing I was thinking about while reading this book was how I would have loved to see it as a movie too. And it will be a movie, eee. I am so excited about it. It will be all kinds of brutal and horrifying. But I cannot wait. This book was made to be a movie. And it will be so good. The Grace Year was everything I wanted it to be, and everything I did not know I wanted. It was brutal and heartbreaking and full of fierce characters. It ruined my mind and my heart. And I could not help but love every piece of it. Even the pain.

This is a book that I think everyone should read. And I am so thrilled that I had the chance to read it early. Cannot wait to own the finished copies of it too. This is a book I would read again, despite knowing how much it hurt me. Because this book is painful. Painful because of the torture and killing but also so painful because of the way girls and women were treated. It was not okay. But it was so good and interesting to read about. Huge thank you to Ebury publishing for sending me a gorgeous free ARC to read and review.