Review: Descendant of the Crane by Joan He 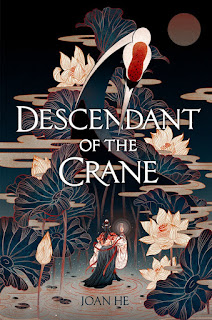 I knew I wanted to read this book when I saw the stunning cover. And read the amazing summary for it too. Finally had the chance to read it, and I'm not disappointed. This book ended up being a whole lot of beautiful. I enjoyed it very much. It was not perfect to me, so giving it four stars, but gosh, how good this was even so.

I will say that this book was super slow. And there was not really much happening most of the time, not until nearer to the ending. Though it was slow, it was never boring. I was always interested in knowing what would happen next. And I loved that. The writing was also pretty much perfect, and I had no issue connecting to it.

Although I will also say that for me, this book was a little hard to read at times. Because even though the writing was beautiful, it was also full of things that I did not know. A whole lot of Chinese customs and such. And I loved reading about that beyond words. It was stunning and felt real. And written so well. But yes. It was also a whole lot of complicated words and descriptions that I had trouble understanding, as I don't know that much about Chinese traditions and such. But that is also a reason for why I liked Descendant of the Crane so much. Because of Chinese inspiration and such. With a bunch of fantasy added, and felt historical as well, which I always enjoy. Gosh, my feelings for this book are complicated. As some things hurt my heart a lot. Yet liked it so.

This book tells the story of Princess Hesina. Her father just died, and as his oldest child, she is to become queen of their kingdom. Which is something she does not really want, but will still do, since it is needed of her. And because of when she is made queen, she will be able to open up a trial to find out who killed her father. Though she seems to be the only one that thinks he was murdered. Gosh, this was an interesting story. Figuring out who did it. And why. Many twists and surprises. Most of them bad, haha. I liked it tons.

Hesina was a bit too trusting of everyone. Especially those she should not have trusted at all. It broke my heart a little. Yet I could not help but love this girl. I wish we got to know more about her, though. But what there was to know was amazing. And I grew to care for this precious girl a whole lot. She was fierce and brave and loving. A bit hidden away at times, but always true to herself. I liked getting to know her more. And I very much enjoyed reading about everything she did. All the new people  she met. Just, everything.

Especially Akira. Whom was the love interest in this book. Except that there was barely any romance at all, and I would have so loved for there to be more. But the book was good even without that, haha. And there was a little romance still. And it was so stunning. Because Akira was such an amazing boy to get to know. Hesina finds him in prison. And she needs him to represent her in court, to find the murderer of her father. And so they slowly become friends. And I liked that a whole lot, reading about them together. Sigh.

Especially loved just getting to know Akira. He had such a tragic back story. Bit scary, a bit heartbreaking. And I loved him so. He was fierce and just awesome. And he and Hesina fit together well. Though, yes, I wish there had been more kissing, and a lot sooner, haha. But they were great as friends too. Then there was all of Hesina's siblings. She has one true brother, a year younger. And their relationship was so very strained. And that broke my heart. Because he was so awesome and I wanted them happy together. Aw.

She also has a half brother, whom she does not seem to like at all. Which also hurt my heart, ha, since he was pretty much all adorable and awkward. I did like that they spent some time together, though, and that she was feeling better about him by the end. I hope. Then she also had two adoptive siblings, twins. Lilian was so sweet and devious and I adored her. Caiyan was a little different. Kind and always there. But oh, I was a little bit unsure about him. Yet he was pretty much amazing too. How rude, haha. I liked them both.

This was a book about Hesina learning to be a queen, trying to help her people, trying to prevent a war. Most of this book takes place in the castle. There was not a lot of action happening at all. But I did not mind one bit. Because I loved reading about these characters and getting to know them. I loved all the mystery of the murder of the king. And all of the secrets that came out. So many of them surprising and different. I loved it. And he magic in this book was so good too. Not a lot of it, but some, and written well.

Though also heartbreaking, considering every person that had magic in this land was hunted down and killed. Which killed my heart a little. And the heart of Hesina too. Reading about the sooths was so very interesting and sad and I enjoyed it a lot. I wish there had been more about it, though. I especially wish that there was a second book. Sigh. I wanted to know more. But I also loved what I did learn. It was not perfect, but was so exciting at times. Slow, but good. I liked learning about this world that Hesina lived in.

We get to know Hesina a bunch in this book. And I adored her the most. Will not mention too much about what the plot is about, but it is pretty much about Hesina being queen. And working on solving the murder of her father. And her spending time with her siblings. And learning new things about the world she lives in. And all of it was exciting and fun to read about. And sad too, at times. I sadly did not completely fall in love with this book, but I loved parts of it very much. And I am so very happy about that. Was pretty great.

The ending was all kinds of rude and good. I am so unsure how to feel about it all. It was full of secrets revealed. And it was also left pretty open. Like only half of the story. And I have read that this story is a standalone. That the author might write companion books, with other point of views. And that breaks my heart a little. Because this story was not finished. And I very much wanted to know more about them all, and what happens next. Sigh. But even so. The ending was pretty amazing. Heartbreaking. But so good.

You all need to read this book too. I think you will love it. Huge thank you to the publisher, Albert Whitman & Company, for accepting my request to read and review this book early via Edelweiss. I am so glad I got to read it, despite taking so long to finally start it. I also have a hardcover of it pre-ordered, and I can't wait to get it. Descendant of the Crane was all kinds of stunning. It was slow, but beautiful. Filled with amazing characters that I adored getting to know. Full of magic and secrets and heartbreak. I liked it so very much.