Review: Song of the Crimson Flower by Julie C. Dao 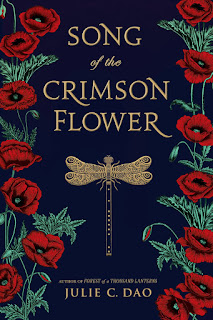 This was my first book by this author. And it will not be my last. I must be honest and say that this would normally not have been a book for me. But when I saw it on Edelweiss I had to read the summary. And I got the need to read it right away. So glad I was able to do so. Because this book was beyond adorable and cute.

Giving it four stars, as it was almost perfect for me. I only wish it had been a little bit more. A little longer. A bit more details about things. But oh my gosh how I liked this book. The story was truly exciting and interesting. The characters were truly adorable. The romance killed me. I could not help but love every moment of it.

I wanted to read this book because of how painful the summary makes it sound. Painful, but hopeful too, with her regretting her actions. And I am so happy that I decided to get this book. And read it right away. Because, yes, the beginning was painful. But then it became fun and cute and simply such an amazing story. The book is short and easy to read. The writing was beautiful. I know there were a lot of details about the two other book set in this world, and full of spoilers for them both, but I do not mind that. It made me want to read them as well. Though I fear they will be more painful than this one, haha. I so do not know how I will write this review of mine. All I have in my thoughts right now is love. Love for Bao and Lan and this gorgeous setting as well.

This book tells the story of Bao and Lan. It is told from both point of views, and I loved that. Because they both have a lot to say and it was needed to be in both heads. And I also pretty much loved them both to pieces from the very beginning. Lan is a rich girl living with her parents and her older brothers. She has been in love with a boy named Tam for ages, as their marriage have been planned since they were little. At least, she thinks they are in love. He has been cold towards her, and she is still waiting for a wedding.

Then there is Bao. A poor orphan boy who has no one that loves him. He have been alone for so many years. And getting to know his life was pretty heartbreaking. Yet so good too. I could not help but love this boy to pieces. He have been in love with Lan for years now. But too shy to speak much to her. Except for the past two weeks he have been playing the flute for her in the river outside of her house at night to her. Sharing with music how he loves her. Except she is positive that it is Tam on the river, playing for her. Oh.

And when Bao finally works up enough courage to tell her the truth, that Tam's parents have been paying him to make it seem like Tam still wants to marry her, when he does not, it does not go well at all. Lan is heartbroken. And she sadly takes it all out on Bao. He is finally confessing his feelings for her. And she hits him and yells at him and it being beyond cruel. But she sees this, sees it on his face, how much she is hurting him. But it is too late by then. But at least now she finally knows the whole truth about Tam too.

Which is how this book begins. Okay, it took almost a hundred pages, all of that. But it was so interesting. And I loved getting to know them both so very much. Lan feels guilty after how she treated Bao, she want to make up for it. But he has left, never to return. Because of how much she hurt him, and since he truly has no one now. But that does not go well for him, as he ends up meeting the river witch. And she curses him. Which must be undone in two weeks, or he will be trapped in his flute forever, where is soul is now.

I will not go into more details than that, just that it was all kinds of exciting and rude. Lan ends up finding the flute with Bao trapped inside, as she is the only person that Bao loves. And so she is the one that can help him have a true form until the curse can be broken. And so they set out on a journey together. With her willing to help him, to make up for how she treated him. He speaks so rudely to her at times, but she answers him, and he explains better, and I loved their sort of banter so very much. It was so well written.

There is so much going on in this book. Despite how short it was. And I couldn't help but treasure every moment that Bao and Lan spent together. He loved her so much. And she ruined his heart. Yet he is now growing to care for her again, with the time they are spending together now. And it was the cutest thing to read about. Their growing friendship was too cute. Truly written well. And I loved the world this story was set in. I loved the different customs and everything else. Mostly I simply loved Bao and Lan, though. Sigh.

I would say that this book was a love story. The love story between a rich girl and a poor boy. The story of how she was so cruel to him and how he ended up being cursed because of this. Starting their two weeks long journey to save him. With them slowly starting to care more for each other. With her seeing him truly, finally. And I loved every single moment of it. I mean, sure, there were other parts to this story too. Some side characters that were interesting as well. But honestly. This was a love story. And it was done so well.

Song of the Crimson Flower was everything I needed it to be and more. It was adorable and fun and so heartbreaking too. I loved almost every second of it. The characters were incredibly well done. And the romance pretty much killed me. The ending was great, though I wish it had been longer. This book was almost perfect for me. And it was just what I needed. Can't wait to own it when it comes out in November and read it again. Thank you to the publisher for my eARC via Edelweiss. So happy I could read it early.