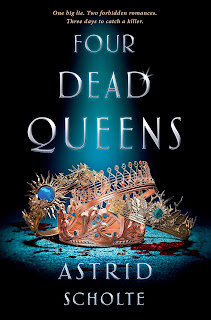 It's been a long time since I last read a book this bad. It is a one star for me. My review will not be positive at all. And there will be spoilers. This is not a book that I feel anyone should read. Myself included. I very much regret reading it. But I did it. Got through it. I had to. Because my copy was a print ARC that I had traded for.

And now I wish to trade it away. Far away. My review will be full of my thoughts about this book. Others will feel differently about it. But I'm not sharing what others think about this book. Sharing my feelings. And my feelings are nowhere near happy. This book was the worst I have read in a long time. Have the most to share.

There was so very much wrong with this book that I honestly do not know where to begin. All of it hurt my head. All of it made me want to throw the book far away. But I stuck to it. I had hope that maybe it could end up getting a little bit better. But it never did. It got worse and worse. And so I can't help but rate it one star. And the biggest reason for it was the writing. I could not stand it. Not for one second. I am not sure I have ever read writing this bad. I do not even know how to describe it right, but my god, it was horrible. Felt like I was reading a very badly written journal, with the main girl telling us point by point how she had spent her day. It wasn't pretty. Was impossible to connect to the characters. Impossible to get lost in the book since the writing was truly bad.

There was also info dump on info dump. All the time. It was beyond annoying. I did not care for any of it. I mean, this was a standalone. And fast to read too. Why did we need to know all the stupid details about the boring world? It could have been done better, I suppose. The world was sort of interesting. But it was not good. The writing completely sucked. For real. And that was not even the only problem with this book. The characters were the worst too. No feeling. No drive. No reason. Just there, and so very badly written.

Most of the book is told from the point of view of Keralie. And then a few chapters from the point of views of the four queens. And my god. How I hated every single character in this book. They were not done well at all. They all lacked something. Humanity, I suppose. They were not even evil or whatever. Just beyond boring. Keralie was supposed to be such a good thief. I did not see that at all. I saw a girl playing at being good. A girl throwing her family away because she was being beyond stupid. The reason was badly done.

And of course she had left her family behind to live with this stupid criminal mastermind boy that called her darlin' every time he saw her. Eye roll forever. He was named Mackiel. And I could not stand him for one minute. They had been best friends for seven years. And suddenly he betrays her. And she is all, oh no, he made me, what am I gonna do. I will never trust another person again. Oh, look, a handsome boy, I will trust him tomorrow. God. I hated this girl. Well, not really, as it was impossible to feel anything at all.

Then there were the queens. Well. I do suppose I must share some spoilery things that happen. Keralie steals some memory chips from her boss, that she puts in her mouth to see the memories. And she sees all four queens die. Except we find out a little later that they are not dead yet, and she saw the plans for killing them. But does she do anything about it? No. Does she try to save the queens? No. Not until it is too late, and all of them are dead again. Haha. She tries to find the assassin. It was laughably bad. Sigh.

She spends these few days with a boy from a different sector in this world. The land is divided into four places, where humans behave different ways, one queen for each place. Varin is from a different sector than Keralie. And so he is all cold and no emotions. Except not really, for he is the one person of his kind that feels things. Sigh. He was there for a reason, but gosh, I did not care for him one bit. Suddenly they are so good friends and then they are kissing while the queens are dying and just. Yuck. It was not good.

There is so much I wish to share about this book. I will try to control myself. Ha. So far that is not going well. But my god. I hated this book. And I feel like that is probably all I can say. The writing was truly so incredibly bad that I die a little just thinking about it. The characters were so boring and so stupid beyond words. The villain was not interesting at all. The girl was trying to be all bad and fierce and whatever. She failed beyond words. The plot was trying to be exciting and scary. It failed. I couldn't stand this book. Ugh.

I felt like this book was trying to be something it was not. That it was trying to be the Three Dark Crowns series. It failed beyond words. It tried to be exciting and mysterious and suspenseful. It failed more than I can say. It even tried being romantic. Haha. It failed most at that. Honestly, this whole book was an epic fail. It was trying so hard to be good. But it was not. Not even a moment of this book was good. It makes me sad to say it, but say it I must. I hated this book. And I will try my hardest to never think of this again.

I will be honest and say that I do not think anyone should read this book. I would not recommend this for anyone. Because the writing was actually that bad. And I will admit to judging those that actually liked this book. So sorry, haha. But I can't understand it at all. Four Dead Queens killed me with how incredibly bad it was. My review have been negative. And I do not regret it for one second. I hated this book. And being honest about it was a must. But have nothing against the author. I'm sure she's lovely. Her book was not.