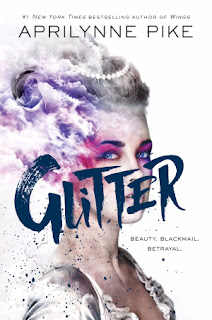 I feel so disappointed. And a bit sad and a bit angry too. This book looks so gorgeous. And I had really hoped that I would enjoy it. If not love it, at least like it. Instead I just about hated it. And I'm giving it only one star. Which doesn't happen all too often. But is always so depressing when it does happen. Sigh.

But it can't be helped with this book. Because it was awful. Just simply truly bad. I had to force myself to finish it. To even read more than just the beginning. I didn't even like the prologue. Ugh. I wish I could have liked some parts of this book, but I didn't even do that. Even the romance was crappy. I'm just so disappointed.

I had really hoped to love this one. Since I have the gorgeous print ARC of this precious looking book. But yeah. Probably getting rid of that one, as I'm never reading this book again. But gosh, it really is gorgeous. That cover is simply stunning. Sadly, the book inside was not. Hmph. And then when I read about the main character, how her skin was olive and her hair dark, I grew to dislike the cover. Cover girl has blond hair and blue eyes. Main character in book does not. Not anyone who looks like the cover girl. And that just makes me even more disappointed. Sigh. There were just so, so many things about this book that I did not like. Shall try to explain why. Sadly, I wouldn't suggest that anyone read this book. Though I'm sure some will love it.

The setting in this book was really weird, to be honest. I thought that maybe it could be awesome, but it wasn't, not for me. Maybe because I didn't like the writing at all. Or because I almost hated the main girl. Shrugs. Main girl, aka Danica, lives in a palace. There they live like it is hundreds of years earlier. As in, they dress like that and act like that. For the most part. The rules aren't the same. And they have some really weird tech. I wish that the past they tried to live in had been written better; could have been good.

Outside their palace is the modern world, or whatever. It's supposed to be set some years in our future. We didn't get to read much about this modern world at all, which was disappointing. Because I didn't care about the palace at all. Danica is seventeen years old. Though for the most part she just acts like she's fourteen or younger. She's sort of childish and so selfish and a bad friend too. Her friends all seemed so amazing. Yet she treated them all so badly and I just grew so sick of her. She was not a good person.

Danica feels like she has a horrible life. Her mom has been trying to move them up in social standings for four years now. And so Danica has had a nose job and done many other things to hide her natural self, or whatever. I did not like reading about that. At all. Danica just seemed fake. It was so often mentioned how huge her breasts were. Highly annoying. She also tightens her corsets so so much that she is always in pain and has the smallest waist. I didn't understand her reason for why she did that. She made no sense.

Anyway. Her horrible life. Some weeks before the book begins, she saw the young king have sex with a girl while strangling her, ending with her dead. Danica did nothing. She let her mom blackmail the king into marrying Danica, which he did not want to do. Neither did she. Yet she did nothing about it. It made no sense to me at all. It's supposed to have been a really traumatic moment, or whatever, but while her mom is selling her to the king, she is standing there looking at how low his pants are hanging. Ugh.

It is supposed to seem that the king, two years older than Danica, is supposed to be such a horrible person. Sadistic and mean and just so awful. Yet he didn't really seem that way at all. Sure, he could be truly mean sometimes, but he truly wasn't that bad. Not at all. And I did not see why Danica was so set against marrying him, against becoming queen. Made no sense. Well, okay, I didn't care for the king at all, and I sort of hated him, and I would never ship them, but he was not the horrible person she claimed.

This book is about Danica wanting to escape her upcoming wedding happening when she turns eighteen. She tries to run away. It doesn't work. So she's told she has to give a man tons of money, and he will get her out. Her way to get that money was to start selling drugs to almost everyone in the palace. Drugs that would make them all addicted. Drugs that could kill them all, if they take a little bit too much. It even does kill someone. Yet Danica doesn't seem to care. At all. She just cares about herself, about getting away.

Sigh. This girl bothered me so much. Even when two people who were close to her died. I felt nothing. Not a single thing. Her grief, or whatever, felt so fake to me. And I hated reading about it. Sigh. I just did not like this girl. I did not like this book. And the plot was pretty boring. And long. Mostly about living in the palace, dressing up, dressing down, and blah blah blah. It got to be boring. Nothing exciting happened. I kept waiting and waiting for something. Hmph. I just feel so disappointed. Book could have been good.

Sure, there is a bit of romance in this book. But I feel like I should mention that it was awful. First of, the names in this book are so silly. I have already managed to forget the boy's name, haha. But it was bad. I didn't get why they got together at all. First time she seems him, she gets this want. This need to touch him. And oh my god. It was the silliest thing. And then. They kiss. After she is assaulted by the king. They have their first kiss, and they have sex at the same time. I think. It was never explained. Poor writing.

Okay. I have already said too much about this book, without truly mentioning much of the plot at all, lol. I was just so disappointed by all of it. Nothing truly happened. The ending was sort of good, I'm curious about book two, but it did not make me like this book. At all. All that happens is Danica wanting to escape her wedding. It's about planning the wedding. Selling drugs to people who doesn't know it. Silly romance that made no sense at all. Ugh. This book was just not good. And I'm just glad to be done with it. Sadly.