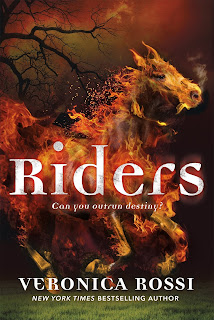 I wanted to love Riders so badly. Because I ADORE Veronica Rossi. She is the most kind. She is always amazing towards me and I adore her so much. Plus I loved her Under the Never Sky trilogy. And so I was sure I would love this new book of hers as well, with how gorgeous it looks and how amazing it sounds.

I really don't know how to share my feelings about this book. Thing is, it isn't going to be a very positive review. And that just breaks my heart. Because I really truly wanted to love this book. And I really thought I would love it. So I'm a bit disappointed. And sad that I didn't love it. But it's just. I did not like it. And so I shall be honest about why I didn't like it. Well, I shall try. I'm not really sure how to explain it. I wanted to love it so much. But it was just impossible for me. But even though I disliked this book, I do not dislike the author at all. I still love her the most. But it also makes it hard to talk about this book in a negative way. Because I don't want Veronica to hate me. I don't think she will, but I'm still a bit worried about it :)

I had issues with Riders from the very beginning. I knew the moment I started it that I wouldn't love the writing. I hoped it would change, but it didn't. Sadly, I couldn't stand the way it was written. I didn't connect with the words. Sometimes the words made no sense at all. It was just not a good writing. Which was so depressing. Then it was the fact that more than half of the book is with Gideon telling a story about the past few weeks of his life. So the writing is even more weird. I just didn't like it much.

And then to describe how I felt about the main character. The boy. The whole book is from Gideon's point of view. Which I should have liked, except I didn't like the writing, and I didn't like him. Ugh. He wasn't an interesting person at all. So boring. And he wasn't all that nice either. I didn't feel for him at all. Sure, he lost his dad a year ago. But I didn't get it. I didn't get why he did all the things that he did. I just. I didn't feel a single thing for Gideon. But I liked one part near the ending, though. So that's kind of good.

The whole point of this book was that Gideon died in the beginning. And then came back again, but different. And this point in the beginning was the first thing I didn't like at all. He died. Which was awesome. He broke his arm and leg and other parts, which was awesome too. But then he heals in a day after a week. And his mom don't notice. His sister don't care that he just drove three hours to see her after she knew he had broken bones, yet didn't anymore. He left his mom for no reason. I didn't get it.

So yeah. Gideon bothered me a little bit. I wanted to love him, but I didn't. Thankfully, I didn't hate him either. The few moments when I did like him was when he lost a limb at the end of the book, lol. I found that part to be the most exciting part of the whole book. Which is a bit depressing. But it was awesome. And I liked his relationship with his horse. That was amazing to read about. Yet it was way too short, which hurt my heart a bit. I just. I wish I could have loved this boy more. But it wasn't possible for me.

There are also a bunch of other characters in this book. I just. I didn't like them. The girl, Daryn. Just, ugh, I didn't like her at all. She was supposed to be interesting, but I didn't see it. And the almost romance was just painful. I didn't like that he was crushing on her right away, and for no reason, as he didn't know her at all. I just. I wish I could have loved her. But I didn't. Then the other three boys. I disliked Jode and Marcus at first. I ended up loving Marcus. But I loved Sebastian at all times. Sniffs.

I don't know what to say about the plot for this book. I wish it had been more amazing. But it wasn't. And so I didn't love it. And it is just all kinds of sad that I didn't. Sniffs. It is about the four horsemen. And Gideon is War. Yet I felt nothing for it. Mostly I think it was because the book was set in our time period. And that bothered me. I didn't like all the things they did. There were a lot of boring moments for me. I just. I'm not going to say more than that about the plot. I do think others will end up loving it.

I also wish to say that though I didn't like this book much, there were some things that I did like a lot. Like the places the book takes place in. Like Norway. Eeek. That made me so happy. I love that Veronica included my country in this book. She's amazing. And I loved the small parts of Norway that was in this gorgeous book. I love how Veronica wrote that. Sigh. So yeah. Lots of love for that. And lots of love for this very precious cover. It is the most gorgeous. I am excited to own a pretty hardcover of this book :)

Okay. I have now said enough about Riders, I think. I'm so heartbroken that I didn't like it much. But I did enjoy it, sometimes. Though most of the time I wanted to stop reading it. Sobs. Hurts my heart. I'm forever thankful to Diana for letting me read it early. Hugs. So so sorry that I didn't love it. But I'm really glad that I read it. I just wish it had been better. But I guess this just wasn't a book for me. Ack. It just hurts my heart so much. I wanted to love it the most. Still, I didn't hate it :) You should read this book.

Goodreads - The Book Depository - Amazon
My Preview Review of Riders
Posted by Carina Olsen at 6:00 AM