Review: No One Else Can Have You by Kathleen Hale 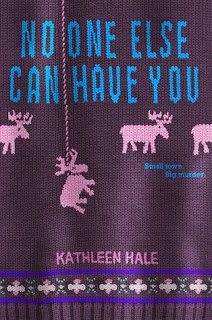 A book should not be allowed to be this bad. I'm sorry, but holy crap. This was not a good book at all. I'm not sure how to write my review for this book. It was not a book for me. I wanted it to be, but it wasn't. So going to start by thanking HarperCollins International for the gorgeous print ARC of it. <3 Means a lot to me, even if I didn't enjoy the book. Which I didn't. At all.

I don't even know where to start. To me this whole book was awful. And I'm not even sure how I managed to finish reading it. As I wanted to stop so many times. But I forced myself, as it was a print ARC copy so I really wanted to finish reading it. But yes. This is a one star review. Which I feel bad about, but not bad enough to lie about my feelings for this book that I hated.

My biggest issue with this book was the writing. I could not stand it. The way the main character, Kippy, was thinking bothered me so much. The way everyone was talking in her small town. I did not think it sounded real either. But yeah. Mostly it just bothered me so much and I had huge issues with reading this book. I wanted to enjoy it, but it was impossible. Kippy seemed like such an idiot. Not in a good way. The book was supposed to be funny a lot of times. It was not. And nothing was in a good way.

The plot in this book is that Kippy's best friend was just murdered. And her boyfriend get arrested for it. Kippy thinks he did it at first. But then she reads her friend's journal, and she doesn't think it was him after all. Which was kind of weird, to be honest. But seriously. The plot in this book was awful. So damn awful. Yeah, I get that most the people are stupid and whatever, but not ALL of them would put a guy who was innocent, had an alibi, in jail. No one thought otherwise. Sigh. I can't get over my hate for it.

I'm not even mentioning all of it. And I won't. Because it is too much. Too much stupidness. I'm getting angry just thinking about it all. Sorry. I just want to forget about this book as soon as possible. Another thing that was fucked up was the dead girl's journal. The things she wrote.. Who thinks like that? Who does things like that? Ugh. I cannot get over how awful this book was. There is even a hint of romance. And it was beyond bad. Kippy was just.. pathetic, to be honest. I'm sorry, but I did not like this book.

I'm not sure what to say about the plot in this book. I was kind of interested in the murder, because the way she was murdered was pretty awful. But that was the only thing that interested me; and it wasn't nearly enough. And Kippy's father. For fuck's sake. Who refuses to listen to their only child, and then sends her to a fucking asylum? I can't get over how stupid this book was. And now it has made me feel stupid as well. I would not recommend you to read this book. Not at all. I'm sorry, but not really.

I was not happy with the writing in this book. At all. Like this one thing that was said: "Sex her right in the butt." Seriously? Who says that? And a 21 year old boy/man even? I would have thought the right thing was "Fuck her in the ass." But either way. The first one didn't even need to be in the book, as he is talking about someone's mother as well. So there you have one example of the writing that I did not like. Sigh. I just really did not like the writing in this book. Which sucks, as I wanted to enjoy it.

Oh, the writing. I hated the writing in this book. Thing is, I don't think the writing was that bad. If only the way the character was thinking wasn't so damn awful. And the way everyone talked. And then the way everyone acted. Sigh. There is just no way I was going to enjoy this book. I was planning on giving it a two star, but then I finished reading it, and I must be honest, there wasn't anything I liked about this book. I could have loved it, because the murder scene was pretty good and creepy. Well, kind of.

But that was it. I hated everything else. And I know that is probably a bit harsh, but come on. This book was awful and I just need to say it, since this is my review and all. Though there was actually one thing that I liked a little bit. Davey. But he is also the one who could not speak right. Plus, he was five years older than Kippy, who was 16. That is just.. not okay, for me. I think. But anyway. I kind of liked Davey, but not enough to like this book. He wasn't even there enough. And Kippy managed to fuck it up. Sigh.

Huge thank you to HarperCollins International for the print ARC that I read. <3 Also thank you to them at Edelweiss for the auto-approval, since I downloaded this book from there months ago. While I did not like the book, I am still glad that I read it. Uhm. Kind of. Well. I wanted to stop reading it, but I finished it. I'm happy for the chance to read it. I'm not sure if I would recommend it, though. (Would not.)

Goodreads - Pre-Order
Posted by Carina Olsen at 1:43 AM