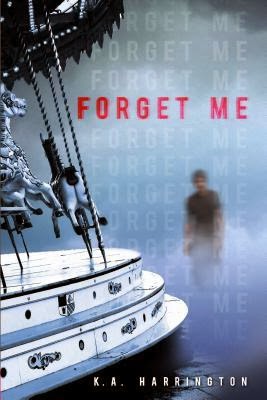 FORGET ME BY K.A. HARRINGTON

An edge-of-your seat psychological thriller with a romantic twist

On the three-month anniversary of her boyfriend Flynn’s death, Morgan uploads her only photo of him to FriendShare to get some closure—but she’s shocked when the facial recognition software suggests she tag him as "Evan Murphy." She’s never heard of Evan, but a quick search tells her that he lives in a nearby town and looks exactly like Flynn. Only this boy is very much alive.

Digging through layers of secrets and lies, Morgan is left questioning everything she thought she knew about her boyfriend, her town, and even her parents' involvement in this massive web of lies.

It's a long time until this book is out. And I haven't been able to figure out if I will love it or not. I think it sounds like an amazing book and a bit creepy as well. Just my kind of book. Though the romance part makes me worry about heartbreak and unhappy ending. I don't want that. But, fingers crossed. As the book does sound amazing so I'm just going to hope that it will be :D Also, I do like the cover. <3
What are you waiting for?
Posted by Carina Olsen at 6:00 AM