Review: The Impossible Knife of Memory by Laurie Halse Anderson 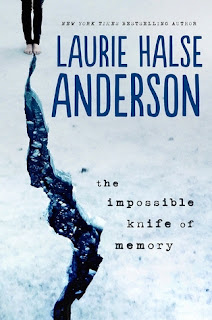 I bought this book because I had seen other people loving it. And I thought the cover was kind of cute. Then it arrived, and I had to start it right away. But the love didn't happen for me. Not at all. And it took me so many days to finally finish this book. I didn't even want to finish it. Which totally sucked, to be honest.

I don't even know where to start with this book. It was just not for me. I did not enjoy the writing at all and most of the time I had to force myself to read the book. Well, okay, almost all the time. I wish it hadn't been that way, but it was. I even found the book to be boring. Which I'm pretty sure it wasn't meant to be.

I didn't connect with the characters. I didn't even feel their pain when they were upset. Because I didn't enjoy the writing. Sigh. Good writing is everything to me. But, well, I wasn't too happy about the story in this book either. How come Hayley was allowed to live with her dad when he was that crazy in the head? How come she was allowed to not do any homework at school? I don't think things happen like that and it drove me a little crazy.

I didn't like the characters in this book. Mostly because I couldn't connect with them. But also because they did some pretty stupid shit and I did not approve or understand it. I'm sorry, but this book was just not for me. I wish I could have loved it. I wanted to. But I did not. The main character, Hayley, pissed me off a bit. I didn't like the way she was thinking and how she thought about other people. I didn't like how she lived with her father or how she was talking/thinking about Trish. I just did not believe in her. I could have liked her, probably, if she had been better. But she wasn't. She wasn't a character for me.

I'm not sure how to talk about the plot in this book. So I'm not sure I'm even going to try. Because there are a lot of things I could say about this book, and right now my head is just filled with negative things. I didn't like Hayley's father. But I didn't really believe in him either. I wasn't scared of him when he yelled and whatever, because to me it didn't feel real. I didn't believe in the writing. And that sucks. Because as I said, I wanted to. But The Impossible Knife of Memory just did nothing for me. Nothing at all.

I felt like nothing happened in this book. There weren't really any high points. Sure, this thing happened in the last twenty pages. But I felt nothing for it. Damn it. So I don't think reading this book was worth it for me. There are a few other characters in this book. Like Gracie. Whom I did not like. We see a drinking scene with her and her boyfriend and it was so silly and unreal. Well, at least for me. Then there is Finn, love interest. We learn about his family, but never learn the end. I kind of liked him.

I just cannot enjoy a book when I do not like the writing. It's just how my head works. And in The Impossible Knife of Memory I did not like the writing at all. But I also had issues with the things that were happening. And weren't happening. And I didn't connect with any of the characters. And I just did not like this book much at all. I'm giving it a two star rating, and at times that feels like too much. But I'm not giving it a one star, because I didn't fully hate it. But there weren't much I enjoyed about it.

I'm starting to doubt my two star rating. I'm thinking I should turn it into a one star. But I won't. Because I have just rated a few one star books, and those were worse than this book. While I didn't like this book, I didn't hate it either. So a two star should be okay. Most likely. Just, sigh. I wish I could have liked this book. I need to read more books that I love. I'm not sure if I would recommend this book to others, though. But, if you don't have issues reading certain writings, then you might like it :) Well, probably.

Goodreads - Buy it
Posted by Carina Olsen at 6:53 PM