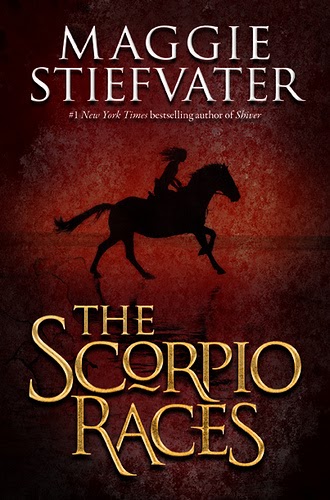 I have never liked horses. Have never wanted one. So I wasn't sure I would like this book at all. But once I started reading it, it was impossible not to fall in love with them. Because they are not horses. They are the capaill uisce. Water horses. And they are perfect. They are monsters. They would rather eat you than play with you. They are creepy as hell. They are beautiful. I'm not sure I have ever loved a creature more than the capaill uisce. They truly are perfect. And they are written so well! Extremely good.

The Scorpio Races is told from two different point of views. There is Kate "Puck" Connolly. And Sean Kendrick. I loved both point of views. Because they are both loveable characters. I might have preferred Sean the most, but that might be because I'm in love with him ;) But I did love Puck as well. They are both amazing. And that the book is from both's point of view is amazing. We needed to see what happened with them both. And it's written so well. And they are so amazing. It's just perfect.

I adored Puck. She's amazing. She lives with her two brothers; Finn and Gabe. They just lost their parents a year ago to the capaill uisce. They aren't doing well, because it isn't easy to get a job where they live; at Thisby. It truly is an amazing Island they live on. Not that many people live there, and it isn't that big, but it's beautiful and amazing. And I wished I lived there. Puck loves it there. She would never leave. And I adored that about her. She's loyal. And kind. And protective. And strong.

It isn't easy for them. Not at all. They don't have enough money, they don't get enough to eat. And I hated it. But I also loved it, because it was so real. Puck has her horse/pony; Dove. And I loved her. Cutest horse. lol :) I'm unsure about her brothers. I disliked Gabe so so much. He just wanted to leave. And I might get that, truly, but he was so cold towards them. He lied to them a lot. And he's just going to abandon them. And I hated it. But gah. He is kind. Kind of. Still, I disliked him a whole lot.

But Finn. I loved Finn. Puck's younger brother. He's adorable. Not a boy, but not yet a man. I loved his relationship to their cat; Puffin. It was adorable. Finn was adorable. Would have loved for him to be my brother. He is a bit weird at times, but that only made me love him more. He is the perfect younger brother. He loves Puck so much. And Gabe. Ugh. And he worries a lot. And I loved that about him so much. Sigh. I just adored Finn. And Puck. And they have the best relationship, really.

Then there is Sean Kendrick. He's nineteen, but seems so much older. But he's still just 19, and I adored him. I loved getting into his head. He's different. He's kind of gifted with the horses. And the capaill uisce. There isn't anyone who loves them more than Sean do. He has his own water horse; Corr. And omg. Corr is the most perfect capaill uisce ever. He's been with Sean for years. He's still a monster like the rest, and dangerous, but Sean loves him. And Corr loves Sean as well. And it's perfect.

But Sean is alone. His mother left for the mainland when he was smaller, and his father died in the Scorpio Races. Now he lives with Benjamin Malvern and his son, Mutt. Sean lives in their barn. But he's kind of happy about it. Maybe. He works for the Malvern farm. There is a lot of horses to take care of, and some capaill uisce. He rides in the Races for Malvern. Which he has won four times. I just hated that Benjamin got all the money from that. Sean deserved so much more. Sigh. A bit angry.

But anyway. Sean is an amazing character. He's so loving and protective and kind. He might not talk a lot, but he listens. And he says everything that matters. I hated that he lived where he lived. It wasn't fair. But he did love working with the horses, and with Corr. That's the thing. Malvern owned Corr, and refused to sell him to Sean. And gah. It made me so angry at times. But it also made a tiny bit sense. Maybe. Either way. I loved reading about it all. Even if it did annoy me sometimes.

Then there was Mutt. And my god. He was so awful. He hated Sean. Truly hated him. But, well, he was mostly jealous I think. But goddamn it. I hated him so much. He was so cruel towards Sean. He did so many awful things to him. The last thing he did in the book was the worst. And ahh. I hated it so much. But it was also so perfect. I was happy that he was in this book. Maybe. I also disliked all the people hanging out with him. There were a lot of assholes in this book. But many good people too.

Like George Holly. A thirty-something horse buyer. He was pretty amazing. I liked him a lot. He seemed to love Sean. He was very kind to him. And to Puck and Finn. And yeah. I just adore him :) Also kind of liked the three sisters. They were pretty awesome too, I think ;p A bit scary and weird, though. That is most of the characters. Those that matters, anyway ;p But there were a lot of people in this book. Many amazing. Many not so amazing. But they were all interesting to read about :)

The plot in The Scorpio Races is amazing. This book is about the Scorpio Races. Which happens every November. It's a race between the capaill uisce. The man capture them from the ocean, and try to train them to race. Some it works with, others it don't. Many of the capaill uisce just wants to go back to the ocean. Or fight. Or kill and eat. But not Corr. Corr is amazing. I wish he was mine. He and Sean. There is so much love between them. They truly love each other. And it was so beautiful.

There is some romance in this book. It's not very much, but it's there and it's perfect. It's sweet. And Sean and Puck belong together. They are so good together. And the love is just beautiful. Although I kind of liked the love between Sean and Corr the most. Maybe. I'm not sure. It was just so amazing and so powerful and never-ending. Anyway. The story in this book is amazing. It's mostly about The Scorpio Races, and I liked that. It's about Puck and Sean racing in the races. For different reasons.

Puck needs to race in the Races because otherwise they will lose their house. Okay, she needs to win all the money to not lose the house. She's racing because her brother, Gabe, is leaving for the mainland. And she wants him to stay longer. And he can't even bother to be there. Grrr. Still. And Sean is racing because he does so every year. But it is different this year. If he wins, he gets to buy Corr. And that is all Sean has ever wanted. It's all he wants. But then he and Puck start training together.

I loved when they trained together. Sean on Corr. Puck on Dove. And omg. Favorite part was when Sean and Puck was riding Corr together. It was a perfect moment. Truly perfect. And it's so amazing and beautiful. There is so much happening in this book. Everything exciting and amazing. There is a lot of evil people in this book. But because there is Sean and Puck I didn't mind. Because they are amazing. And I just adored them so much. And Corr. He was so perfect. Sigh. I adore him way too much.

One of the things I loved the most in this book were the capaill uisce. They are amazing creatures. I also kind of liked the normal horses as well. But the capaill uisce are magic. They do something with your heart. At least with mine. I wanted them. I wanted them all. And I just could not help loving them, even though they killed a lot. But they were beautiful and deadly. And so amazing to read about. I just wanted more and more. I never wanted The Scorpio Races to end. I wanted it to go on forever.

I don't know how to describe my feelings for this book. I truly don't. But I will try my best. I'm just so conflicted. Because I loved this book more than anything. It's my favorite stand-alone book. Can't choose between this and Graceling. I can't. But I adore both. The Scorpio Races is amazing. It is a beautiful book. Full of love. Full of loss. Of grief. But also hope and romance. And some happiness. But also a lot of sadness. The ending made me cry. But it was also so damn perfect. Could not have been better.

Think I have said it all now :) I want a sequel. But not because there need to be one. The ending of The Scorpio Races is perfect. But it is also heartbreaking. But so good. There does not need to be another book. But I want one. More than anything. I want more Sean. And more Puck. And more Corr. I want more of anything. Hoping I might have been able to convince you to read this book :) Because you truly must read it. The Scorpio Races is a perfect book. Everyone needs to read it. Go buy it!

I also have a blogoversary giveaway going at the moment. Where you can win a UK paperback copy of The Scorpio Races. Trust me, you want it. You can enter that one here. :) Also, it ends very, very soon.

Update: Newer and better review of the book can be found here.
Posted by Carina Olsen at 3:15 PM