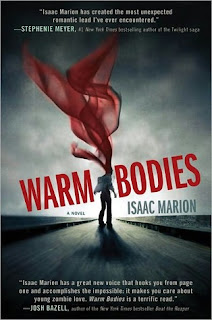 I loved this book. I mean, I really, really loved it. It is just so amazing. The writing is so good, and the characters are great, and the plot is amazing. Everything about Warm Bodies is good. It is an YA book, right? Because the characters are teenagers. And it felt like a YA book. So that is good as well :)

The last four books, I think, that I have read have been books I have liked, but not loved. They weren't really anything special. And I wanted to read something amazing. With a good romance. Then I remembered that I had Warm Bodies, and had not read it yet. So I picked it up. And first, that cover is just stunning. I, at least, loves it :) I payed a lot of money for the book, but it was so worth it.

The main character in this book, "R", is a zombie. He starts out as an almost regular zombie. But he is a bit different from the others. I can talk in short sentences; and he cares about things. Like killing. He isn't that comfortable with it, but he still does it; otherwise he would die.

Then he and a group of other zombies goes out hunting for food. For the Living. Which they find, and R kills someone else. But it isn't just a regular person whose brain he's eating. It's the Perry, the boyfriend of Julie. And R is getting his memories. Which hasn't happened before while eating brain. Hih.

Because of that, R notices Julie there. And he doesn't want to kill her, and he doesn't want anyone else to kill her either. Thus starting their journey together. Which I will not talk about; considering this is a short book, and I would rather you read it for yourself :D Because it is awesome.

R is an amazing character. I loved that this story is from his POV. He changes a lot through this book, especially at the end. Which I loved so much. Anyway, R is an kind and sweet person. Well, he tries his best to be so. And I just adored him. Even though he was a zombie. A cute one, though :D

R has a best friend; M. And M is a great character as well. A bit dumb, but then, he is a zombie ;) And I liked him that way, anyway. He is a great friend for R to have. And he changes too. Sort of. They have a lot of zombies at the airport where they live, and I liked a few of them. Like the kids. But some I didn't like. Like the Boneys. Didn't like those much. But they were a great plot :D

I also really liked Julie. She curses a lot, but I didn't mind :) She is really kind and caring, and she has had a hard life. But she's still alive, so that's something ;p She also has a best friend; Nora. I liked her too. For the most part :) One I didn't like though, was Perry. He seemed like a douche. But he wasn't always that, so I can't really hate him that much ;p

Anyway, this book has stunning writing, and amazing characters. It has an incredible plot, and I really liked that. Although I felt like the book was too short. Wish there was more :) But, there is romance in this book. Not very much, but I loved it. And I also loved the end of this book. It is final, but there could easily be a sequel. Which I hope for very much :)

You really need to read this book if you haven't yet. It will be worth it ;)