Review: Inside Out by Maria V. Snyder 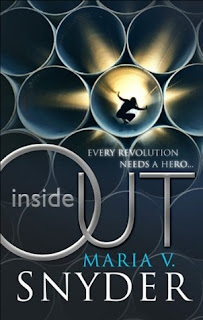 I really liked this book. But it has it's flaws, so I didn't love it so much. But it is still a four star :D And it is really good :) And I'm really excited to read book two in this series ;) Because it is good. Really good. The plot is amazing, but it also reminds me a lot of other books; like Across the Universe ;p I don't mind though. Not much, anyway ;p

I liked the plot a lot. I liked were the people lived, and how they lived. I mean, it is cruel, sort of, and horrible. But it is still sort of amazing. It's written well, I think. I also really liked the job the main character, Trella, had. In the pipes :) Although, ten hours of work, and then 5 hours break before work again? Too much work! I think (A)

But anyway, the pipes were awesome. Liked that she used those to get around everywhere :) I don't want to say more about the plot though, because even though it is amazing, if I talk about it too much I would spoil it ;p And I would rather you read it for yourself :)

I really liked the characters :) Well, most of the time. Trella is a great character. She is smart, kind and cute. She doesn't have many friends; just one. And she keeps to herself most of the time. Which I loved. Her friend, Cog, is not a romantic interest. Which I loved even more ;) He is very kind though. A good friend to Trella. A bit sad about what happens to him. Okay, a lot sad about it.

I really loved Riley though. <3 He lives in the Upper levels, and he shouldn't be with Trella at all. But he is. And I loved it. He is a great love interest :) Even though there isn't much romance in this book. But there is some, and it is good :) Hoping for more in book two, though ;)

Also wished there had been more romance. But, yeah, hoping for more of that in book two ;) Also hoping for more about the Outside :D And to know more about the plot ;) It is really interesting. Anyway, if you have not read this book, you really should :) It's good. It has good characters, and bad ones, and it has a bit romance with a great plot.

Goodreads - Buy it
Posted by Carina Olsen at 8:03 AM