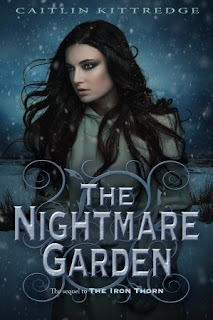 After I finished The Iron Thorn I knew I needed to read the sequel right away. And I did. Meaning I read over 600 pages yesterday; so my head ain't feeling too good :p But anyway. I didn't love this book as much as I loved The Iron Thorn, but I still loved it a whole lot :D It is a really, really good sequel.

The Nightmare Garden has a lot of action going on. So much happens in it. But it is all exciting to read about :) Not all good things, though. Mostly just bad things happen. But it is all so good to read about, so I didn't mind that much :D At least not in the beginning. I minded a whole lot at the end.

The plot in this book is just as good as the plot in book 1. I liked it all. Don't want to spoil it; so if you have not read book one you really should not read the summary for The Nightmare Garden :) It spoils a whole lot. I didn't read it before I read the book though; so I didn't mind :)

There is a lot of bad guys in this book. And they are really bad. But I liked that they were there; it made the story much more interesting :) Although something didn't need to be, to be honest. There is some new characters in this book; and I did like some of them :) Although we didn't get to see too much of them.

Most though, there are the same characters from book one :) And I liked that. Although I still felt like this book didn't focus much on the people. Like, we barely saw something about Cal at all. And even though I didn't like him that much; I wish there had been more of him :) I was a tiny bit disappointed in Aoife in this book. Not much, just a tiny bit.

She was alot more grumpy in this book, especially towards Dean and I didn't like that. But she wasn't that bad; so I can forgive her for it :) I think. But then she also did something really stupid near the end of the book that I did not approve of. But it did fit with the story; so I dealed with it ;)

She was still a great character though. I really did like that the book was from her POV :) I really loved Dean in this book. He just gets better and better. He is the best character. <3 And I love him so much. What I was a bit disappointed in though, was how little romance there was in this book :( There was more in the first book. Even though they are together in this book; there was little romance.

And then that beyond horrible thing happened at the end. And I'm just really pissed about it. You really should now that the book ends really bad. Really, really bad. And oh so sad :'( But. There is a tiny hope at the end. And I'm extremely happy about that. But how in the world I will survive waiting a year for the next book, I do not know. I need it! <3

Anyway,. this book is awesome. Really good. So if you have read the first book, you must read this! :D It is so good. And if you still haven't read book one, what are you waiting for? This series is amazing.

Goodreads - Buy it
Posted by Carina Olsen at 8:46 AM