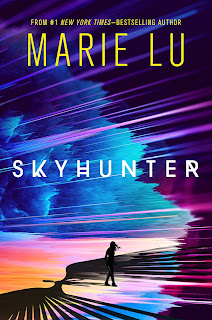 I have some mixed feelings about this book. I had been excited to read it for ages, as I have been a fan of Marie since her first book came out. And this new one sounded pretty amazing. And it was. At first. I found the beginning to be pretty great. Thought I would love this book. But then I grew bored. I just did not love it.

Which breaks my heart a little. Giving this book three stars. I so wish I could have loved it. But I also still liked it a lot. I liked the characters a lot. I enjoyed learning more about this world. And the writing was good. Not perfect, as I had issues, but was good and I did enjoy a lot of this book. I just didn't love it like I wished.

There is so much I wish to share about this book. Yet I'm certain I will not be able to write much of it down. Will be sharing some plot details about it, yet not really any spoilers. This book takes place in a world almost ours. The people in this place knows that there were people existing long before them, better people who knew much more than they did. There were ruins of their cities and a few books about the things they did. But what happened to these ancient people are not known. They are just gone. And those living in this world now are just trying their very best to survive. One type of people are having a war with everyone else. They have conquered every land so far, except for one. The land and people of Mara. Where our main character, Talin, live now.

Getting to know this girl was pretty good. At first I felt certain that I would adore her. But I grew so bored with her and everything. I felt like so little happened and I felt like her thoughts just stopped being all that interesting. Which was the worst. But yeah. There were parts of Talin that I did love, though. She and her mom escaped from their home about ten years ago, when the Federation took over their city. They fled with so many others, while others lay dead behind them. It was so sad to read about. So real at times too.

And so Talin has lived in Mara for years now. With her mom and their people being forced to live on the outside of the city walls, not with the people of Mara. They are being called names and not treated well at all for being foreign to those who live there. It was heartbreaking to read about and so very real with the world we live in too. We learn about Talin and her mom. I liked them both. But Talin has a big hole in her memory, and I felt like this was being mentioned a little too much without anything ever happening with it.

Talin has not spoken a single word since the day she and her mom escaped from their home. And so she speaks with sign language. And that was another thing I really loved. I loved the diversity in this book and the inclusion of people who do not speak. I felt like it was done well, though I cannot know for sure, as I'm not without speak. But for me, it was written good. I adored Talin even more for this. Despite how I felt like this book was boring. Oops. But it was not all bad. As I liked learning about this world. Just wanted more.

Talin has trained as a Striker since she was twelve. Since a boy noticed her watching them. She was not allowed to be there, inside the city walls. But she was. And she wanted to be a Striker so badly. This boy helped her become one. When they had never included someone like her before. She wasn't treated well by everyone. Which was not good at all. But she had her Shield. The boy she fought with every day and trained with to get better. Corian. Whom then died straight away. Yeah. I felt like there was too little grief.

This book is about Talin and her now country fighting to remain free from the Federation. About her and her friends being the best to defend their land. They are trained to fight Ghosts, some type of awful man-made monster sent at them. I found that interesting, but not scary enough at all, to be honest. Ack. It is the story of Talin saving an enemy soldier from being executed. About being forced to then take care of him after that. A man named Red. I did like him a lot. Still, wanted more. Sigh. He was exciting, though.

Because Red had been through so much. He was not quite human. They had done experiments on him. Which was the very worst. Yet so interesting too and I liked reading about it all. I was just fully confused at times. It starts with him being whipped, until he was almost dead. Yet it is never mentioned again. Did he not have any damage, when he almost died? Too weird. How quickly he trusted Talin and her friends. How he suddenly just defended them and forgave them all. It seemed way too unreal and weird for me.

But yeah. I still liked getting to know Red and I liked reading about him and Talin. An almost romance. I shall not say much more about this book. Already said way too much. Oops. I liked the characters. I just found them a bit boring. I liked the plot, yet that was a bit boring too, which disappointed me. At first I did like the writing. But then I just wanted the book to be over with already and could not find it in me to care about any of them. Which I am not pleased about. Sigh. But still. Three stars. As I did enjoy this book too.

Huge thank you to the publisher, Roaring Brook Press, for letting me read this book early via Netgalley. I'm glad I read this one. And will still be getting a hardcover for my Marie collection. This book also ended on a big cliffhanger. I did not care that much, but I must know what happens next too, ha. Skyhunter was a pretty great book. Not perfect to me, sadly, but pretty exciting at times too. The characters were mostly good. The story was mostly interesting. I just did not love it. But so curious what the rest of you will think.